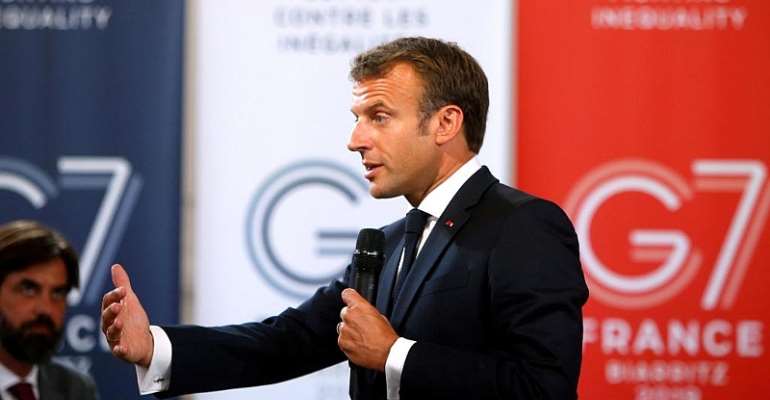 In a televised speech at the beach resort of Biarritz, French president Emmanuel Macron said he wants G7 members to focus on the defence of democracy, gender equality, education and the environment and has invited Asian, African and Latin American leaders to the summit.

The three-day Group of Seven meeting in the Atlantic seaside resort of Biarritz takes place amid sharp differences over several of global issues that risk further dividing a group of countries already struggling to speak with one voice.

Summit host French President Emmanuel Macron says he wants the heads of Britain, Canada, Germany, Italy, Japan and the United States to focus on the defence of democracy, gender equality, education and the environment and has invited Asian, African and Latin American leaders to join them for a global push on these issues.

Climate change
"In the fight against climate change, I have invited non-G7 members including India, Australia, Chile and South Africa," Macron said during a televised speech in Biarritz on Saturday.

Macron has led a growing wave of international pressure on Brazilian President Jair Bolsonaro over the fires raging in the Amazon rainforest.

On Friday Macron said France would oppose a trade deal between the EU and South America's Mercosur nations, effectively killing any chance of it being ratified, as a punishment for Bolsonaro's intransigence over the wildfires.

Icebreaker lunch for Trump and Macron
Following his speech, Macron hosted US President Donald Trump for a surprise lunch at the ornate Hotel du Palais, in an attempt to get the summit off on a good footing after a tense build-up in which Trump and EU leaders traded threats of trade war.

He said that they would be discussing a raft of pressing international issues, including the standoff with Iran over its alleged nuclear weapon ambitions, and stressed that "strong coordination" was needed.

"We actually have a lot in common," Trump said across the table to Macron, adding that they had "been friends for a long time."

Trump said that at times they "go at each other a little bit" but had a "special relationship".

Anti-G7 protests
Macron also acknowledged the desire to exchange with those who were against the values promoted by the G7 summit, the so-called anti-G7 protesters.

Some 9,000 estimated participants, including anti-capitalists, environmental activists and some Yellow Vest anti-government protesters marched across the French-Spanish border on Saturday.

The rally itself was peaceful but on Friday police said 17 people were arrested amid clashes with anti-G7 protesters camped out near Hendaye.

"I want to call for calm and for unity," Macron said in his address.

"We won't be able to face all these big challenges if we don't act together," he said.

“This is another G7 summit which will be a difficult test of unity and solidarity of the free world and its leaders,” he told reporters ahead of the Biarritz gathering.

A grim array of disputes and problems await the leaders, with a trade war between China and the United States deteriorating, European governments struggling to defuse tensions between Washington and Tehran, and global condemnation growing over illegal fires which are ravaging the Amazon.

Trump's history of pugnacity at multilateral gatherings, which brought last year's G7 summit to an acrimonious end, means there is scant hope for substantive agreements.