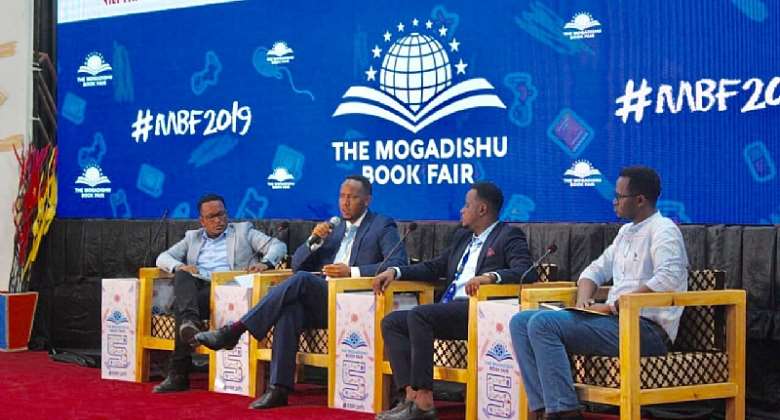 Nearly two thousand people most of them Somali youth are keening to attend this annual gathering at Hall near Mogadishu airport, where security heavily guarded.

"We invited 42 authors and professors including 9 foreigners to take part this literature annual and we also called many Somalis inside and outside the country to engage with us this fair," said Dini.

University students, academics, authors mostly youth, and many others are actively involving this three event and even some of them have travelled long distance to witness the occasion.

Dini said the Books are going to exhibit here are different languages but most of them are Somali language, adding that this Fair is meant to encourage the young Somali generation to read and write.

Acting the Mayor of Mogadishu, Ibrahim Omar Mahad-Alle better known Ibrahim Dhere, was attended the opening ceremony this morning and he supported and very welcomed while delivered his opening remarks at the podium.

"We as Mogadishu administration we always welcome any bright mind who come up with constructive and development idea and we give them platform to exercise their dreams,".

Focusing different topics all Books here in this Hall, and most of them are social books while others history, literatures like poems and songs, but Dini believes there is huge shift they have made comparing for last event, therefore the young authors have improved the writing skills.

Dahir Ali Abukar, a young Somali author from Britain and he was inspired by this thrive writing talents among Somali youth in the country despite enormous challenges they face almost every day.

During this Fair, there will be panel discussions on various topics and different guest honors each and every one of them will highlights their assigned matter.

Apart from Somali Diaspora who have invited by the organizers to the fifth Mogadishu Book Fair, there is very special guest who is award-wining South African investigative journalist and he came with here his book called 'Nothing Left to Steal'.

Mogadishu is now recovering from the past complex bad stories, although still sometimes the city host explosions orchestrated by AlQeada Link Alshabaab terrorist group, but people have ambition to build their country again.