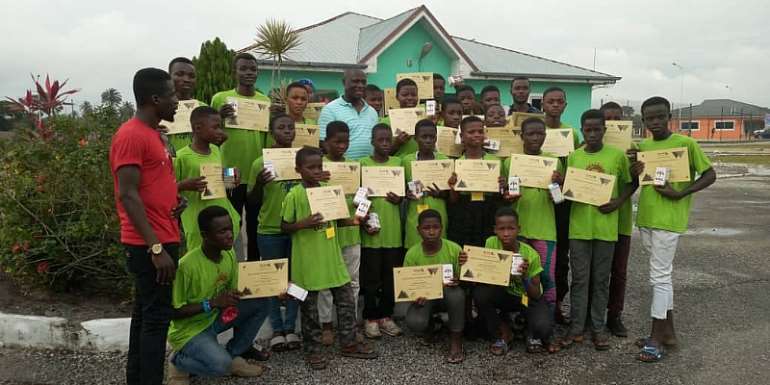 The Member of Parliament for Ellembelle constituency, Hon. Armah-Kofi Buah has sponsored thirty (30) basic school pupils to take part in one of the most enterprising programs in Ve Agbome, Volta region on 16th August 2019.

The program was organised by Nneka youth foundation, a global foundation which aims at equipping school going ages between 12 and 16 with the entrepreneurial skills which could help reduce teenage pregnancy, drug abuse and keep the pupils in school.

The foundation started in the year 2012 with five hundred (500) pupils and can now boast of three thousand (3,000) trainees every year. Some of the activities the pupils are engaged in within the six (6) days include Educative Moral talk, Intensive Arts & Crafts, ICT Training, Interactive group discussions, In-door & out-door games, Group challenges, Reading & Spelling Bee, Talent shows and many more.

Hon. Emmanuel Armah Kofi Buah, the Member of Parliament for Ellembelle and his able team selected pupils from the various rural communities to take part in the program which awarded them with a recognized certificate.

The pupils were also taken through some sceneries and tourism places in the Volta region to explore to know some of the places they have heard or read in their books like the Afadjato mountain, Wli falls, Tafi Monkey Sanctuary etc.

They were taken through to Atimpoku to see the Adome bridge for the first time. The cost for the program was bore by Hon. Armah Kofi Buah for the thirty (30) pupils, three teachers who accompany and supervise the pupils, and two drivers.

This has helped in building the human resources capacity of the children who are equipped with such entrepreneurial skills which will live with them forever pointing to the fact that, the GES new curriculum has a proposed extra-curricula activities which include the development of entrepreneur skills.

The thirty (30) pupils are from 22 different communities across the length and breadth of Ellembelle district.

The CEO of the Nneka Foundation, Madam Cecilia Fiaka told the pupils that she and her team will visit the Ellembelle district to know the impact the program has brought on them as they are pioneers or the first pupils to come from the Western region since the program's inception in 2012.

Hon. Buah advised the school kids to take seriously what they were going to learn and utilize the opportunities given.