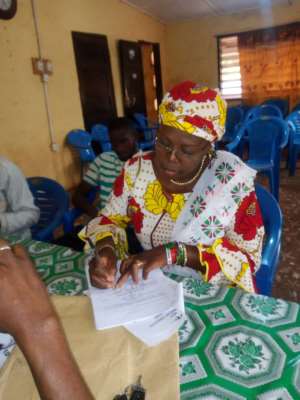 The National Democratic Congress (NDC) Parliamentary aspirant for the Salaga South Constituency in the Savannah Region, has observed that the shambolic performance of the Akufo-Addo-led government, coupled with some of his misjudged actions and inactions, will make the 2020 campaign very easy for the NDC.

According to Hajia Zuwera Ibrahima, the President and theNew Patriotic Party (NPP), have clearly proven to Ghanaians that, they are incapable and have no antidote to the many problems confronting the country, contrary to their claim in opposition, adding that, their poor showing as a government, compared to the NDC, will see them out of power next year.

She said, the performance of former President Mahama under his first four years, will give him the advantage to return as President in 2021.

Assessing the NDC’s chances in the 2020 general elections, she said “The outlook, the political landscape as we speak, is a call for change. I think that Ghanaians made a mistake and have realized that they made a mistake on 7th December 2016 and Ghanaians are just crying for change.

The NDC, will present Ghanaians with that change on December 7, 2020. President Mahama is going to return in 2021, as the new president of this country.

So Ghanaians have seen it for themselves--- “Nana Addo, is actually the campaign message for the NDC to pick up power in the next election and I know by the grace of God, the NDC, InshaAllah, is coming back in January 2021”.

Hajia Zuwera, said the President’s penchant for renaming existing institutions after his party folks and family members, when those who built them (referring to former Presidents Rawlings and Mahama) during their tenure refrained from doing so, was something that must not be countenance.

Since assuming office, the government has failed woefully to build to reduce the country’s infrastructure deficit, but the President she said, was on renaming spree, naming everything he comes across, after his cronies and family members.

“I mean we don’t have to beg the issues, we know what is happening, we have seen it all.We have seen renaming of institutions, when other leaders built institutions, they didn’t name them, they built and people named them after them.

I have heard former President Rawlings, say that he doesn’t want any national monument named after him, but we all know what he did to add to the infrastructure stock of this country”.

She went on “President Mahama from 2013 to 2016, we know the kinds of infrastructure and monuments he built, but he did not name any of them after himself or his relatives. Now, we have a scenario when all our President does is, to name existing institutions after members of his family.

We haven’t seen any single infrastructure being built anywhere to add”.

Hajia Zuwera, recounted how her Constituency has been denied their part of the national cake after a major road contract awarded by the Mahama government, was stopped by the current government. She said, the stalling of the project, has inconvenienced indigenes who have had to live with the dusty road until government reconsidersits decision.

“Look, the road network to my constituency from Tamale, you don’t want to know and this was a contract that was awarded under President Mahama, but for some reasons, this current government found it necessary to stall that project and it remains stalled and all we are doing is to inhale dust. It’s been three years now since the project was stalled”.

The daughter of the former Principal and Rector of the Tamale Polytechnic, is contesting the August 24 parliamentary primaries of the opposition NDC, with three others, all males.

She is convinced that at the end of counting on Saturday, she will come out victorious, basing her hopes on the work her team and her are embarking on in the Constituency.

She told Herald her biggest hurdle now, is how to win the primaries and the rest will be history because; her support base cuts across all political divide.

According to the former Minister-Counsellor and Head of Information and Public Relations of the Ghana High Commission in London, the seat traditionally belong to the NDC, but explained that on two occasions which included the 2016 elections, it lost, it was primarily because there were divisions in the party which gave the NPP, the chance to snatch it.

Hajia Zuwera, who holds MA in Diplomacy and International Business from the University of East Anglia in the UK, said her campaign has been what has been accepted in Ghana politics as “door to door” where she is able to interact with party people, at the branch level and all others.

In her view, this has afforded her the opportunity to see at first hand, the problems of both party members and Constituency generally. She said, she was informed, this is the first time any aspirant has conducted a campaign where the aspirant travelled to and fro all the communities and interacted with the people at the grassroots level.

Having studied and worked as community person, Hajia Zuwera, who is currently on her thesis project in pursuit of a PhD in Media and Communication from the Goldsmiths College, University of London, said coming from a rural community, she understands her people better and they also believe she is the best among her competitors.

“In terms of my chances, I will say it is very bright, I have received acceptability by the people, the party, the chiefs and the opinion leaders and I have embarked on a massive and vigorous campaign that can only yield only positive result.

You could be a member of their party but if you are not their favourite, they will not vote for you and those were some of the reasons that led to our defeat in the 2016 general election and it is for that reason that I think I stand in good stead, to lead the party to victory if I emerge the winner on August 24”.

Hajia Zuwera is promising to work hard to develop the Constituency and also empower the branch executives and all others.

The opposition NDC, has always won the presidential elections in that Constituency, but the parliamentary elections has been swinging between the NDC and the NPP, even though the opposition party, has won most of the time.