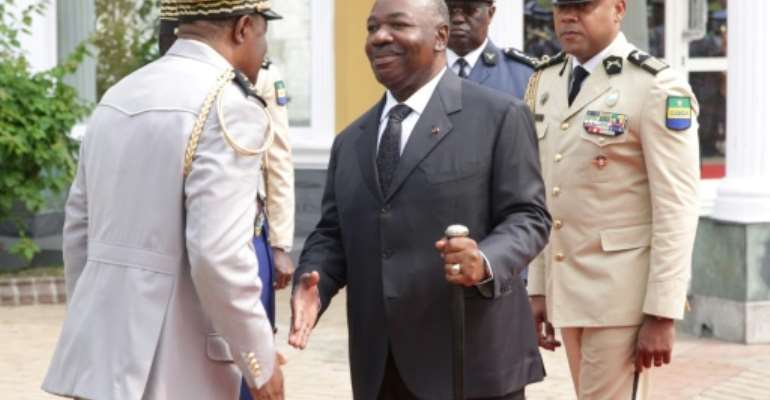 President Ali Bongo of Gabon has been mostly absent from the public scene since having a stroke nearly 10 months ago, raising questions about his fitness to govern.

Here is a recap of developments.

State media in Saudi Arabia, where Bongo is attending an economic forum, announce on October 26, 2018 that the president has been hospitalised.

There are no details and the Gabon presidency says he is merely tired.

After the secrecy around the death of his father Omar Bongo in 2009, speculation swirls that he is incapacitated or even dead.

On October 28, Bongo's office confirms for the first time that he has been in hospital since the 24th, saying he has severe fatigue.

Senior figures in the ruling Gabonese Democratic Party (PDG) call on the government to clarify his condition.

On November 11, after foreign sources say he had suffered a stroke, the presidency admits that Bongo has undergone surgery and is "seriously ill".

He is transferred to Morocco on November 29.

On December 9 Vice President Claver Maganga Moussavou says Bongo has suffered a stroke, the first official details of his illness.

Bongo addresses his compatriots for the first time in a video message released on December 31, and recorded in Rabat, in which he says he is "better" and "preparing to meet you again soon".

On January 7 renegade soldiers call on radio for the public to "rise up", in an apparent coup bid profiting from Bongo's absence.

The rebel chief is captured and two of his men killed.

On January 13 a government reshuffle is announced in a video message recorded by Bongo from Morocco.

Two days later he flies back to preside over the swearing-in of the new line-up, but the ceremony is closed to press and public.

Official footage includes a few brief shots of Bongo seated in a wheelchair and squinting slightly.

The next day he returns to Rabat "to resume his rehabilitation", a source says.

On February 25 authorities release pictures of Bongo in Libreville and holding meetings.

He stays for less than 48 hours before going back to Morocco, returning on March 23.

On March 28, 10 members of Gabon's opposition, civil society and trade unions file a suit for an official enquiry to determine if Bongo is capable of governing.

The next day the president holds his first cabinet meeting since his return. He says on Twitter afterwards he had demanded "Efficiency. Results."

Official images show him in a djellaba gown and turban, supporting himself with a cane as he talks with ministers.

On May 2 a lower court rejects the demand for an inquiry.

On June 8 the president gives his first televised speech since his illness. In the recorded remarks, he calls on his prime minister to form a new government that is "exemplary, honest and ethical".

On August 12 a Court of Appeal says it will hear the petition for Bongo to be tested for fitness to govern, setting the date for August 26.

On August 16, Bongo attends half-hour ceremonies to honour Gabon's first post-independence president. He walks with a cane and an aide helps him climb several steps.