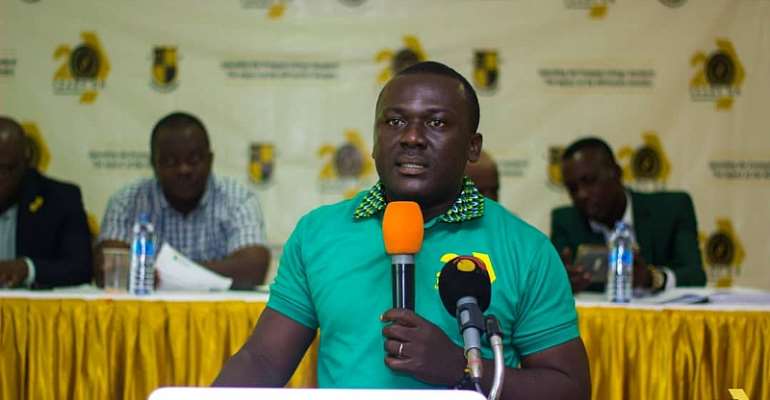 The Old students of the year 2000 group of Prempeh College have set themselves to etch their names among the legacies of their alma mater as they converge to mark their 20th anniversary under the theme “Upholding the Prempeh College standard the impact of the Millennium Amanffuo”.

The Millennium Amanffuo Group consisting four chapters drawn from Ghana, the United States of America and the United Kingdom on Thursday converged at the Royal Lametta hotel for the official launch of the year long commemoration.

The ceremony was a mix bag of fraternity with old pals, reminiscing old memories; remembering teachers some of whom had passed on; outdooring of an anniversary logo and generally outlining the schedule of activities and projects for the anniversary.

Addressing the launch, guest speaker and chairman Senior Bene Tagboto commended the Millennium group for daring to take up the challenge to better the lot of the Senior High School.

The farmer and 1991 – 1992 School Prefect stated, “Twenty years on, in 2019 we have become who we are with the understanding of supporting one another and giving back to Prempeh College. This is my pleasure and I pray that this opportunity of converging here is the beginning of your doing greater things for yourselves and your college,”

The secretary for the Amanffuo Old Students Mr Frimpong Asante charged old boys to identify with the Association underscoring the huge potential the union holds for members.

“The problem,” he mentioned “is that, Amanffuo we are sitting on gold but we don’t know how to mine it. We have a lot of resources because hardly will you move to any institution without meeting a senior but if we are not united, there is nothing we can do.”

The Chairman of the Millennium Amanffuo Old Students Batch Rene plahar pointed out that two key words ‘standards’ and ‘ethics’ upheld in the theme for the anniversary mirrored the values of Knowledge and Integrity captured in the motor of the college.

The then headmaster of the school Mr E.A. Sekyere stole the day recounting his strict sense of discipline and how he brought about reforms in the school.

Congratulating the group, he recounted that the 2000 year group did Prempeh College honours. coming tops in the West Africa Examination Council rankings for that year AND grabbing two deserving shields that were presented to the then president John Agyekum Kuffour who graced the school’s Speech and Price Giving Day.

Announcing scheduled activities for the commemoration, secretary of the planning committee Yaw Adu Gyamfi indicated that the year group has earmarked funds for a legacy project, “that will signify 20 years of our impact on the school.”

The Millennium Batch also announced a package to support the 2020 National Science and Math Quiz contestants to win the prestigious trophy as the 4 time winners have failed to maintain their grip on the trophy after the well celebrated 2017 victory.

The team will from March 2020 offer their services, institutions and companies once every year for internships and career counselling for students.

Other social activities that were lined up included a football match with Opoku Ware Senior High School; a wellness walk through principal streets of Kumasi; the compilation of a Millennium Amanffuo Magazine, a Corporate Social Investment project and a home coming ceremony to crown it all.

Sharing fondest memories with Ultimate News, a millennium Amanfuo Kwabeena Sarpong a.k.a. Mioka recounted an experience of being punished to weed for two weeks after a house master caught them in a common room watching a football match at an unapproved time.

He nonetheless noted, “As a group we are convinced that where ever we find ourselves now, is because of Prempeh College so the onus lies on us to give back to the school.”