By Rami Almeghari in Gaza - RFI 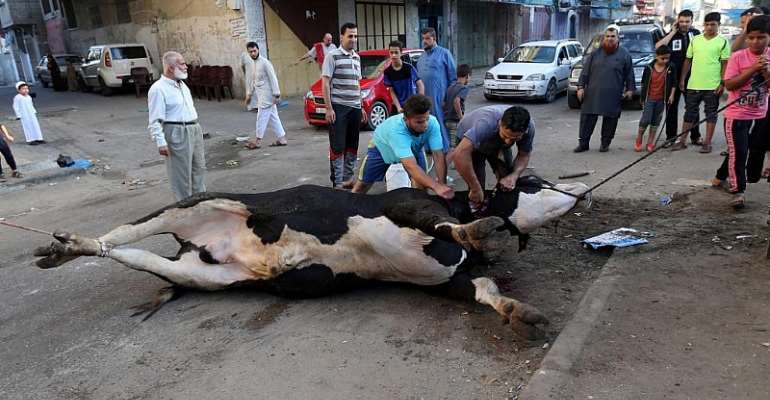 As the Muslim world celebrated the Eid al-Adha religious holiday on Sunday, the menu stayed frugal in the Gaza Strip where an ongoing blockade has forced Palestinians to keep a tight rein on their pockets.

This is the second Eid of the year, after Eid al-Fitr in June, and is the 'Festival of Sacrifice'.

The four-day celebration represents the day when the Muslim Prophet Ibrahim sacrificed his only son Ismail to God.

The belief holds that God stayed his hand, sparing the boy, and placing a lamb in his place.

Since then, Muslims have commemorated Eid al-Adha by slaughtering an animal.

The meat is shared equally between family, friends and the poor.

This year in Gaza however, some Palestinians are too poor to make the sacrifice.

"I have been able to sell only 10 calves out of the forty available at my farm", explains Mahmoud Alnady, who owns farmland in the central and northern Gaza Strip.

"I have been in this business for more than four decades and this season is unprecedented in terms of the sale of my calves.

Falling sales
Since 2017, sales have dropped gradually and notably," he told RFI.

Gaza has been under a blockade by Israel and Egypt since 2007, which cite security concerns for restrictions the World Bank says have severely damaged its economy.

Nearly 80 per cent of the enclave's 2 million residents rely on some form of aid and over half are unemployed.

"This is the worst season ever in terms of public spending," comments for his part Mohannad Alassnar, the owner of a women's clothes store near the Nuseirat refugee camp.

"Usually, all my items would have been sold out two weeks before Eid started, this year I have to wait for customers to show up," he told RFI.

Pay cuts
In March, hundreds of Gaza-based employees, who are on the Palestinian Authority's payroll, had their salaries slashed amid a dispute with Israel over payments it makes to the families of Palestinians in Israeli jails.

Israel says the payments fan Palestinian violence, and in February, it removed the portion the PA designates for prisoners' families from taxes it transfers monthly to the body under interim peace accords.

Gazans have also paid the price for a 2014 unity deal between Hamas and Fatah, which saw the salaries of some 45,000-government employees cut.

To make up the shortfall for Eid, several charities have stepped in to help families celebrate the occasion regardless of the constraints.

Some charity
"For the past couple of years, we in the ministry have followed up on the distribution of meat during the Eid season", comments Amir Alqiq, head of the Foreign Charitable Organizations Department with the Gaza-based interior ministry.

Alqiq told RFI that around 250,000 Palestinian families in the Gaza Strip would be helped.

"Each household, irrespectively, will get a package of between 1 to 2 kilos of meat depending on the number and situation of each family", he said.