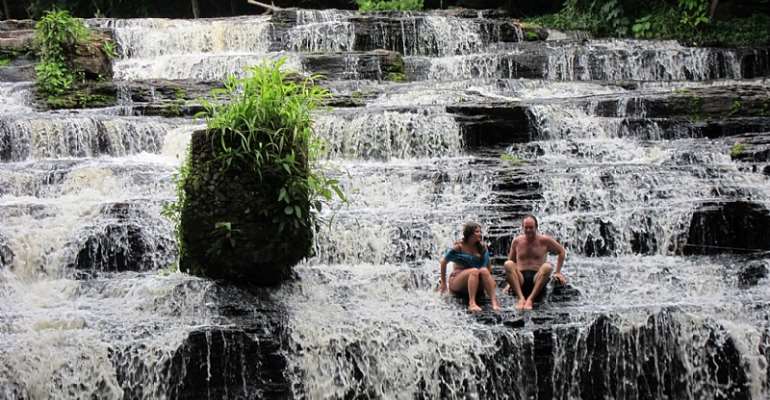 The Chief Executive Officer for the Middle Belt Authority, Mr Joe Dankwah, is calling for interested investors to partner his outfit to harness the full potentials in ecotourism in the Bono East Region.

The CEO made the call at Fuller Water Fall at Yabraso in the Kintampo North Municipality when he met with the chiefs and the members of the community.

It formed part of stakeholders’ engagement towards a transition between his office and that of the Savanna Accelerated Development Authority (SADA) and to complete a process of taking over the full development and management of the Fuller Falls to ensure it becomes the state of the art tourism destination.

SADA had made some payments to the traditional authority to officially acquire parcels of land around the Fuller Fall for investment.

It is in lights of this, that Mr Dankwah visited the area to ascertain the documents available to his office and also to obtain first-hand information about the transactions and its viability.

Upon consultations with the custodians of the area and other stakeholders, the CEO became convinced that, the earlier negotiation by SADA was worthy and there is an urgent need to develop the facility and other tourism sites within the Bono East enclave.

He therefore called on investors to come in for Public-Private Partnership, PPP or Build Operate and Transfer arrangements.

The community was led by the Chief Mansra, Nana Bisakwan II and the Assemblyman for Asantekwa/Yabraso Electoral Area, Agyeman Duah.

The Middle Belt comprises of all the constituencies in the Ashanti, Eastern, Bono, Ahafo and Bono East Regions.