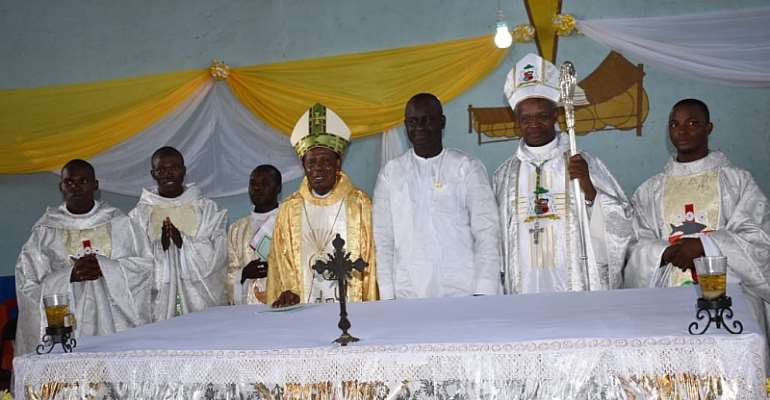 The newly ordained priest were: Reverend Duorinaah Therong Barnabas, from Sankana in the Nadowli/Kaleo District of the Upper West Region, Rev. Saakom Isaac, from Babile Kumasaal in the Lawra District and Rev. Naah Gordon Langyel from Jirapa.

The ordination was conducted by the Arch Bishop of the Wa Diocese of the Catholic Church, Most Reverend Bishop Richard Kuuia Baawobr.

Speaking at the ordination ceremony, Dr Bin Salih commended the new priests for dedicating their lives to the service of God and urged them to live an exemplary live for their communities and congregations to emulate.

“However, you need to bear in mind that the responsibility that comes with it is quite enormous. Your congregants and community members will look up to you for spiritual guidance and counselling”, he said.

Dr Bin Salih also acknowledged the immense contribution of the Catholic Church to national development through enhancing access to quality education and healthcare delivery among others.

“We in government will continuously acknowledge the significant role of religious bodies such as the Catholic Church in the development of our dear region in particular and the nation at large.

Apart from the investments the church has made and continues to make in education, health and other critical sectors of the economy, its continues development of the spiritual lives of our people cannot be over-emphasised”, he explained.

The Regional Minister also stated that the Wa Campus of the University for Development Studies (UDS) had been granted autonomous status to be known as Simon Dombo University of Business and Integrated Studies.

Dr Bin Salih donated an amount of GH₵3,000.00 to the church to support the works of the three newly ordained priests.