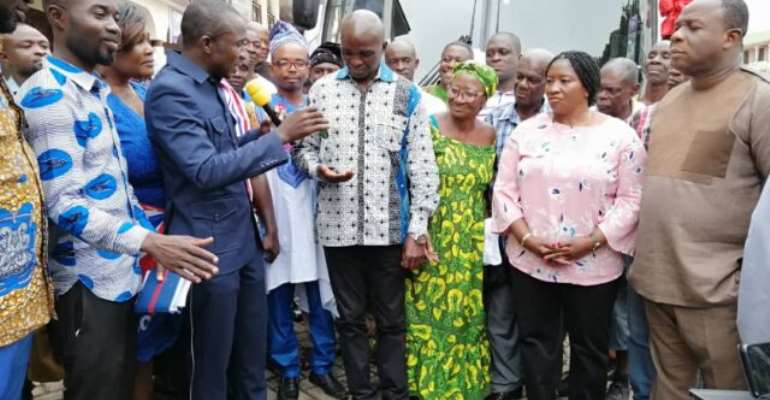 The Member of Parliament (MP) for Nhyiaeso constituency in the Ashanti region, Hon Kennedy Kwasi Kankam on Friday August 9, 20129 unveiled a brand new bus valued several thousands of Ghana cedis for the Nhyiaeso branch of the New Patriotic Party (NPP).

The MP also commissioned a newly rented ultramodern office for the constituency he represents in Parliament.

The inaugural ceremony was graced by the Director of Operations at the Presidency Lord Komey , the Member of Parliament for Kwadaso constituency Dr. SK Nuama, constituency executives, polling station agents and hundreds of party supporters

Addressing the party members at the new office at Santasi, the Director of Operations at the Presidency Mr. Lord Commey lauded the efforts of the Nhyaieso MP and urged him to use his term to serve the constituents well.

He noted that the service one renders when he or she is in office determines the kind of support the people in the constituency or locality will give out.

‘’Let this mind be in all of us that we are elected to serve the people and the people we serve will only renew our mandates when they realize we are committed in serving them and seeking after their welfare’’, Mr Commey stressed.

He noted that having been in office for two and half years the MP had shown great resolve to support members of the party and the constituency as a whole.

Mr Agyei who is popularly called ‘Geokad’ rallied NPP members in the constituency to support the MP in his bid to develop the Nhyiaeso constituency.

He noted that the purchase of a bus and the renting of an office complex by the MP was only a tip of the iceberg since the MP has also given scholarships and substantial funds to members of the constituency including polling station executives to carry out businesses of their choice.

‘’I want to state it here and clearly that Kennedy Kankam is a selfless MP whose preoccupation is seeking the welfare of the constituency and members of the NPP and I as the Chairman as well as my family will always render support to enable him complete the vision he has for Nhyiaeso’’, Chairman Geokad posited.


MEMBER OF PARLIAMENT (MP):
Speaking with passion at the elaborate ceremony later, Hon Kankam thanked residents of the constituency for giving him the opportunity to serve them in Parliament.

He pledged his commitment to seeing to the welfare and wellbeing of the constituents, adding the purchase of the bus and the renting of an office for the party is only part of the plans he has for the constituency.

Hon Kankam revealed to rapturous applause the purchase of a parcel of land where his outfit intends to build a permanent office structure for the party in the constituency.

He also asked that members of the community who own personal but registered businesses to align with a newly created outfit termed the ‘Nhyiaeso Chamber of Commerce’ (NCC) so that they can get partnerships with some Asian and other foreign companies to do businesses with.

‘’I am committed to serve as MP and I am determined to harness both the human and natural resource potentials in this community for development and I urge all of us to support my outfit in this noble agenda for Nhyiaeso’’, the MP passionately stressed.