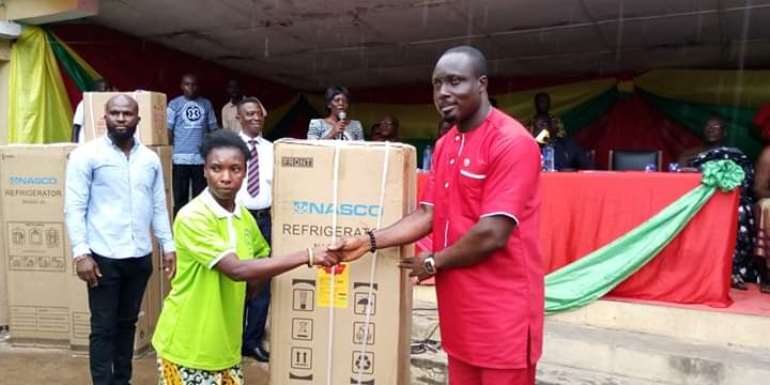 The Nzema East Municipal Assembly (NEMA) in the Western Region has supported people living with disabilities.

The presentation was done at a public forum organized for members of the group (People living with disabilities) by the Municipal Disability Fund Management Committee (MDFMC) at Axim Community Center on Tuesday, August 6, 2019.

The amount was released to cover over sixty individuals with disabilities in the Municipality.

The money which forms part of their share of the Assembly’s Common Fund is to help them finance their activities in order to independently champion their own course without depending on anyone in society.

This also comes as a result of the NPP's 2016 campaign promise to increase the Disability Fund Component of the District Assemblies Common Fund, from two per cent (2%) to three per cent (3%).

The donation was in categories as education support, financial support, medical support, items and income generation among others.

Delivering the items to the beneficiaries, the Municipal Chief Executive for the area, Hon. Frank Okpenyen popularly known as Franko thanked the disabled group for voting Nana Addo Dankwa Akufo-Addo in 2016 to become president of Ghana.

He also thanked President Akufo-Addo for honouring his 2016 electioneering campaign pledge by increasing the Disability Fund Component of the District Assemblies Common Fund, from 2% to 3%.

According to the MCE, the NDC government didn't do transparent work on the fund.

"During NDC era, the disabled group didn't see what we have done today", he opined.

He emphasized, "This kind gesture is an evidence of an avowed response by the NPP Government to solve the problems and the needs of people with disabilities in Ghana and the NPP Government sees the disabled people as very important people to the society".

He also hailed the Akufo-Addo-led Government for employing some disabled people to work at various toll booths across the country and for that matter four disabled have been employed and working at Ankobra toll booth in Nzema.

He, therefore, revealed to the gathering that the disbursement is in line with the guidelines of the District Assemblies Common Fund in which a percentage of the total amount transferred to the Assemblies is allocated to persons with disabilities.

The MCE entreated the beneficiaries to try to invest the money into productive ventures to help uplift their standards of living and welfare in the society.

He also reminded them that there would be intensive and regular monitoring exercise to see how they were faring with the support received.

He continued that several others who have also applied for the fund would be considered the next time the releases were made available to the Assembly.

He seized the occasion to applaud Chairman of the Municipal Disability Fund Management Committee, Mr. Daniel Badu for the thorough work done to select the beneficiaries to ensure that the funds were disbursed to the right people.

He, therefore, took advantage of the atmosphere to command the Member of Parliament (MP) for the area for her continued support giving to the Assembly.

The Western Regional President of Ghana Society of the Physically Disabled, Mr. Samuel K. Quansah thanked President Akufo-Addo for thinking about the disabled.

"Let us clap for President Akufo-Addo and his Government for thinking about the welfare of we the disabled in Ghana. This is time we have seen that a government thinks about us", he said.

He also thanked the MCE for being truthful to them and asked God to bless him abundantly.

He also urged members not to squander the money and that they should desist from sitting on the streets and begging for money for survival. He said Ghanaians have been encouraged not to discriminate against the disabled people living in the country.

He said the gesture was going to help improve the living standard of the beneficiaries, adding that in the past, the disbursement of the fund was not transparent and did not benefit the right people.

On his part, the Chief of Awiafom and Dwantoahene of Lower Axim Traditional Council, Nana Awiafom II, hailed President Akufo-Addo for the kind gesture given to the disabled.

He urged the beneficiaries and the good people of Nzema East Municipality to rally behind President Akufo-Addo and retain him in 2020 for the continuity of such gesture.

The Member of Parliament for the area, Hon. Catherine Afeku disclosed that the selection of beneficiaries was very transparent since they had used the prescribed guidelines to arrive at the decision as to who should benefit out of the numerous applications they received seeking for support from the fund.

She also said that the purpose of the fund was to empower persons with disability economically to get them out of the street begging for arms which sometimes resulted in the loss of precious lives of some of them through accidents.

She, therefore seized the opportunity to urge them to use the items to achieve the intended purpose.

In an interview with Daniel Kaku after the ceremony, Miss Susana Blay who is a disabled, thanked the Akufo-Addo-led Government for the support given to her colleagues.

She also thanked the Government for recruiting her into the NABCO programme when she was unemployed after completing Takoradi Polytechnic in 2013.

She beseeched the general public to desist from seeing them as people who are not important in society.

She asked government to involve the disabled in decision making process as part of improving good governance in the country.

Miss Susana Mensah, therefore, appealed to Government to factor them in planning and construction of infrastructure projects such as houses, hospitals, and schools so that the disabled could able to use the facilities without any suffering.

"My appeal to Government is that whenever School buildings are going to be constructed, Government should think about us because my tertiary institution that I attended that is Takoradi Polytechnic, I had to climb the third floor of the school before attending lectures and after completion I had to stay home until recently I was employed by NABCO so Government can consider us for immediate employment after school", she noted.

The occasion was very colourful and was graced by the Chiefs and people of the area, the staff of the Assembly, NPP Constituency Executive led by the Chairman, the media among others.