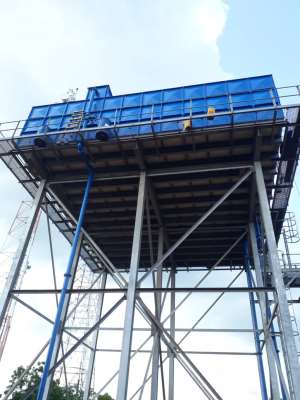 The Youth of Salaga in the Savannah Region have showered praises on the Managing Director of Ghana Water Company, Dr. Clifford Braimah and the Savannah Regional Minister Salifu Braimah Adam(MP) for what they describe as selfless efforts in ensuring the people of Salaga get portable and sustainable water.

This follows the construction of a 102,000 gallons overhead tank at Kpembe to serve the Salaga Secondary School area and the Kpembe community.

They say the migration of the Salaga water system from community water to urban water coupled with rigorous infrastructure to meet the demands is in itself a relief.

Frederick Tahiru a known NPP activist and development advocate said the over a decade water crises faced in salaga and its surrounding areas will soon be a thing of the past.

He added "very soon, our mothers will sit in their houses and fetch water without stressing themselves to walk to kpembe dam to fetch water"

Mr. Frederick on behalf of the youth applauded the Nana Addo led NPP government for recognising the water challenge the people of Salaga have been facing and appointing a native of Salaga to ensure they drink good water.

He also acknowledged Parliament for approving a 233 million euros facility to get water for Damango, Yapei and other Districts in Gonjaland.

He appealed to the youth to support the MD Ghana Water Company and the MP to bring more development into the Municipality.

The Salaga water project when completed is expected to serve over 6000 gallons of water per day to Salaga and its adjoining communities.

President Akuffo Addo in 2017 at Kpembe made a promise to the Kpembewura and his people the perennial water situation in Salaga will be solved by 2020.