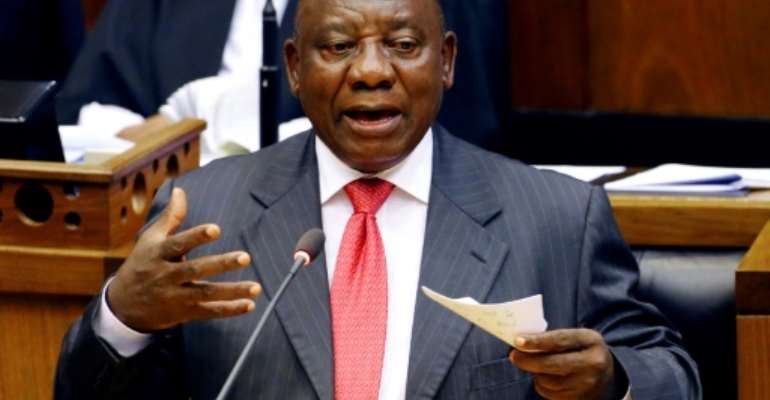 Analysts said the damning report by the country's ombudswoman, Busisiwe Mkhwebane, could boost Ramaphosa's opponents within the ruling African National Congress (ANC) party, which is riven by in-fighting.

Mkhwebane determined that the president had given parliament "erroneous" information when responding to an opposition question over the October 2017 donation.

Ramaphosa initially told lawmakers that the payment was to his son Andile for consultancy work for Bosasa, now known as African Global Operations (AGO).

But Ramaphosa later said it was a donation towards his campaign to become ANC party leader -- a hard-fought battle in which he beat ex-president Jacob Zuma's chosen candidate.

Ramaphosa reacted strongly to the report, saying in a statement that it was "unfortunate" that Mkhwebane had not "given due consideration" to his explanation that he did not know about the donation.

Ramaphosa "reaffirms his determination and commitment to fight all forms of corruption" and that "no person regardless of the position they hold is above law", the statement said.

He has promised to return the funds.

In the report released on Friday, Mkhwebane said that despite Ramaphosa correcting himself "he indeed misled parliament".

"He should have allowed himself sufficient time to research on a well-informed response," she said.

After taking over when graft-tainted Zuma was ousted in 2018, Ramaphosa led the ANC to victory in May elections, staking his reputation on fighting corruption.

The findings against the president were "more damaging than expected", said Darias Jonker of the London-based Eurasia risk consultancy.

The ANC is bitterly split between Zuma supporters and those backing Ramaphosa, who took the helm after Zuma became entangled in graft scandals.

"This report will add to the (pro-Zuma) faction's plans to neutralize and remove Ramaphosa, as they are threatened by his anti-corruption campaign," Jonker said.

But he ruled out Ramaphosa facing criminal charges or removal by parliament "in the short-term".

Mkhwebane is the Public Protector, a powerful watchdog in South Africa who should be politically independent, although critics accuse her of being a Zuma loyalist.

Zuma on Friday withdrew from testifying to an inquiry into corruption during his rule, complaining of bias, though he may return at a later date.

In the corruption scandal popularly referred to as "state capture", he is alleged to have overseen mass looting of public assets during his nine-year tenure.

Mkhwebane added that the funds for Ramaphosa's campaign were moved from one account to another, raising suspicion of "money-laundering".

She asked the country's prosecution authority to investigate and also gave the speaker of parliament 30 days to demand Ramaphosa divulge publicly all the donations he received towards his campaign.

Ramaphosa's office said he would study the report in detail and decide on any further action.

The main opposition Democratic Alliance party, which first raised questions about the donation to Ramaphosa, called for lawmakers to take decisive action.

"It is time that parliament regain its teeth so that no individual who rises to the office of president will ever be able to abuse that power," DA leader Mmusi Maimane told reporters.

He demanded that Ramaphosa appear before a special parliamentary committee, saying "what is clear is that this matter runs much deeper than initially thought."