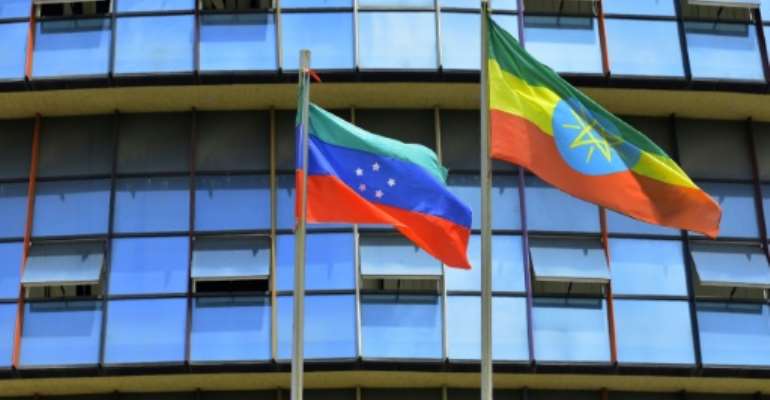 The unofficial green, blue and red flag of the advocated region for the Sidama ethnic group (L), the largest in southern Ethiopia, flies next to the Ethiopian national standard at Hawassa city. By Michael TEWELDE (AFP)

An Ethiopian political party pushing for the creation of a breakaway region said Thursday it was prepared to go along with new plans for a referendum announced by electoral officials.

Leaders of the Sidama ethnic group in southern Ethiopia had planned to unilaterally declare their own federal state on Thursday - a move analysts warned could inflame Ethiopia's political crisis and lead to bloodshed.

At present, Ethiopia is partitioned into nine semi-autonomous regions. The constitution requires the government to organise a referendum for any ethnic group that wants to form a new entity within a year of them requesting it.

The Sidama have agitated for years to leave the diverse Southern Nations, Nationalities, and Peoples' Region of which they are a part, and create their own state.

The group -- the largest in the state -- said the deadline for the referendum was Thursday.

However Ethiopia's election board said this week it would hold a referendum before the end of the year. It said it had not received the referendum request until November 2018, meaning it still had several months to hold the vote.

Though the Sidama Liberation Movement political party earlier said a referendum held after July would be unacceptable, spokesman Desalegne Mesa told AFP Thursday that the party would accept the new timeline in the interest of peace.

"We agree to that point because even if the electoral board and the (ruling coalition) are ignoring the people and the constitution we are working to minimise the loss of life," he said.

"Our young people are calming themselves and staying at home. They have to get ready to prepare our referendum programme."

It was not clear whether the party's new stance would be endorsed by everyone in Hawassa, where residents said the streets were quiet Thursday morning and the security forces had ramped up their presence.

Many young people who had agitated for the creation of a new state are "not happy" with plans for a November referendum and people are wary of how they might react, one Hawassa resident told AFP.

"If nothing is happening people may come out later," the resident said. "I think most people are just staying at home for the time being."

The Sidama issue is the latest headache for Prime Minister Abiy Ahmed, who is determined to reform the nation after decades of iron-fisted rule, but is facing ethnic violence in the diverse country that has displaced more than two million people.