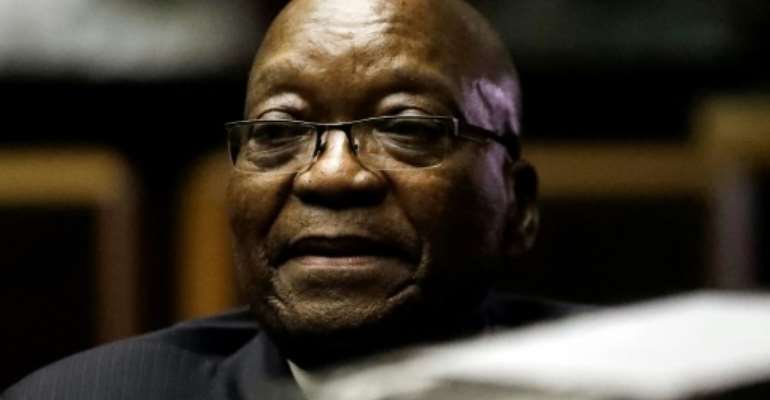 Zuma is accused of overseeing mass looting of state funds during his nine-year reign before he was ousted in 2018 by the ruling ANC party and replaced by Cyril Ramaphosa. By Themba Hadebe (POOL/AFP)

South African former president Jacob Zuma is due on Monday to make a much-anticipated appearance before an inquiry into alleged corruption after previous witnesses gave damning evidence against him.

Zuma is accused of overseeing mass looting of state funds during his nine-year reign before he was ousted in 2018 by the ruling ANC party and replaced by Cyril Ramaphosa.

Zuma, 77, has denied all wrongdoing, and his lawyers have described the inquiry as an attempt to "ambush and humiliate" him.

The former president, who is not legally required to appear, agreed to attend for up to five days this week, though it is unclear if he will cooperate with any cross-examination.

His request to see the questions in advance was denied by the inquiry commission, which is probing the corruption scandal known as "state capture".

"In all honesty, the commission asked me to come to testify and put forward any information that I might have," Zuma said on Friday, ahead of the televised hearings.

"We will see how things pan out, but I am going there."

The inquiry commission said last month that Zuma was invited to appear "to enable him to give his side of the story".

Led by judge Raymond Zondo, the probe is investigating a web of deals involving government officials, the wealthy Gupta family and state-owned companies.

According to one witness at the commission, Zuma allegedly accepted a monthly $2,200 bribe delivered in luxury bags from a security firm that was trying to evade police investigation.

The money was in theory for his charity foundation.

Former finance minister Nhlanhla Nene, who was sacked by Zuma in 2015, testified that Zuma pushed policies on nuclear power and aviation that were designed to benefit the Gupta family.

The Gupta brothers are accused of fraudulently profiting from vast government contracts including energy and transport deals under Zuma.

The Guptas owned a uranium mine, which would have seen profits soar from the nuclear deal, as well as a portfolio of mining, technology and media companies.

They allegedly held such sway over Zuma that they were able to select some of his cabinet ministers.

Former deputy finance minister Mcebisi Jonas told the inquiry that the Guptas offered him the finance minister's job and even threatened to kill him after he refused to accept a $40 million bribe.

The Financial Mail weekly said on Thursday that Zuma's lawyer Daniel Mantsha had stopped communicating with the inquiry's officials ahead of Zuma's testimony.

Mantsha has previously told the commission that Zuma was keen to appear in front of a "truly independent" forum to "expose lies" about him.

Zuma was forced to set up the commission in January 2018, shortly before he left office, after failing in a legal battle to overturn the instructions of the country's ethics ombudsman.

It has been holding hearings in Johannesburg since last year.

Zuma has also been charged with 16 counts of graft linked to an arms deal from before he became president.

The Indian-born Gupta brothers -- Ajay, Atul and Rajesh -- have left South Africa and are now based in Dubai.