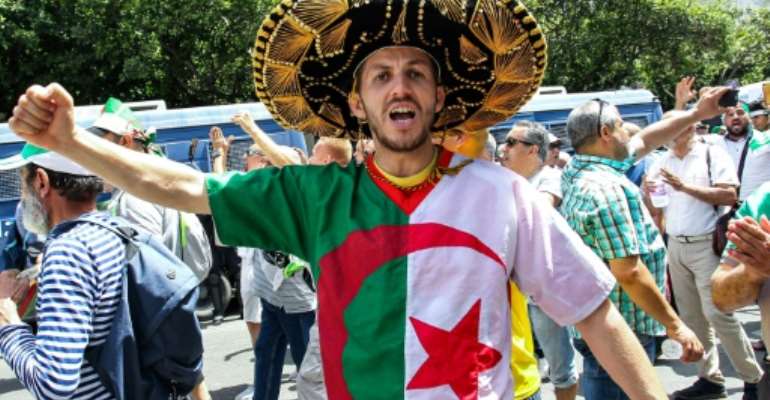 Algerians have held 21 consecutive weeks of anti-government protest demanding an overhaul of the country's political leadership. By - (AFP)

Crowds of Algerians defied a massive police deployment Friday to protest against the government, buoyed by the national football team's qualification for the Africa Cup of Nations semi finals.

After celebrating all night their side's defeat of Ivory Coast on penalties, Algerians flooded the streets of the capital to once again press their demands for an overhaul of the North African country's political leadership.

Mass protests forced longtime president Abdelaziz Bouteflika to resign in early April, but demonstrators have kept up the pressure, calling for all regime insiders to step aside.

The protest movement -- now in its 21st week -- is also demanding the establishment of independent institutions to oversee fresh elections.

Calling for a "civilian, not military, state" the demonstrators flooded the streets of central Algiers, despite the deployment of large numbers of police from early morning.

Long lines of police vans were parked on either side of the road where protesters marched, significantly reducing the space available for demonstrators.

Engine oil was poured on steps, railings and other areas where protesters have been known to gather, AFP reporters said, apparently to keep them at bay.

Police also detained a dozen demonstrators for no apparent reason, as in past rallies, reporters said.

"There is a clear will (by the police) to stop peaceful marches in Algiers," tweeted Said Salhi, vice president of the Algerian League for the Defence of Human Rights, known by its French acronym LADDH.

He denounced an "impressive police deployment" which he said included "roadblocks" at the entrances to the capital to check the identities of protesters, carry out searches and detain demonstrators.

Protester Aicha Sahli said "I'm fed up with a government that is imposing itself on the people."

"The authorities must understand that we refuse elections (organised) by the kings of fraud," she told AFP.

Friday's protest comes as interim President Abdelkader Bensalah remains in post, in the absence of elections after his mandate expired on Tuesday.

Bensalah last week called for a national dialogue without the involvement of the state or the military to pave the way for presidential elections, after polls planned for early July were scrapped.

On Wednesday Gaid Salah said that Bensalah's proposal was a "sensible approach" to end Algeria's crisis, adding that elections should take place as soon as possible.

He also warned against portraying Algeria as as a nation that was no longer a "civilian state".