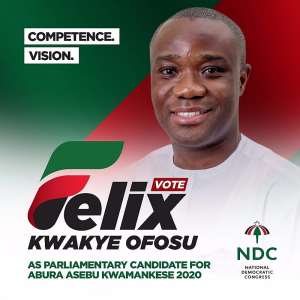 r Former Deputy Minister of Information, Felix Kwakye Ofosu has declared his intention to contest in the National Democratic Congress’ parliamentary primaries in the Abura-Asebu-Kwamankese Constituency.

He declared his intention in a post on his Facebook wall with the inscription: “It’s official. I am running.”

In a poster he shared on Facebook, Mr. Kwakye Ofosu who is also a known NDC party communicator wrote:

Should he be elected by delegates of the party in the constituency, Kwakye Ofosu will most likely face strong competition from the NPP’s Elvis Morris Donko who is the current MP for the area.

Felix Ofosu Kwakye is the latest NDC bigwig to join the parliamentary race after former Gender Minister, Nana Oye Lithur declared her intention to run in the Adentan constitutency.

“Following consultations, I have taken a resolute decision to offer myself as a willing and able candidate for the Adentan Parliamentary Seat on the ticket of the NDC,” she said in a statement.

Mr. Agyeman is however yet to declare the party he will be seeking to represent. Asawase: Tensions high as new NDC candidate vows to oust Muntaka

In a related development, there is seeming tension in the Asawase Constituency as members of the NDC are divided following the emergence of a new person who is seeking to contest, Muntaka Mubarak, the sitting Member of Parliament, in the party's internal elections.

Delegates of the party in the Constituency have formed camps to throw their support for Muntaka Mubarak and the prospective parliamentary aspirant, Mabarick Masawudu.

Supporters of the prospective aspirant are already accusing constituency executives of frustrating processes to allow him pick up nomination forms to contest the party's parliamentary primaries.