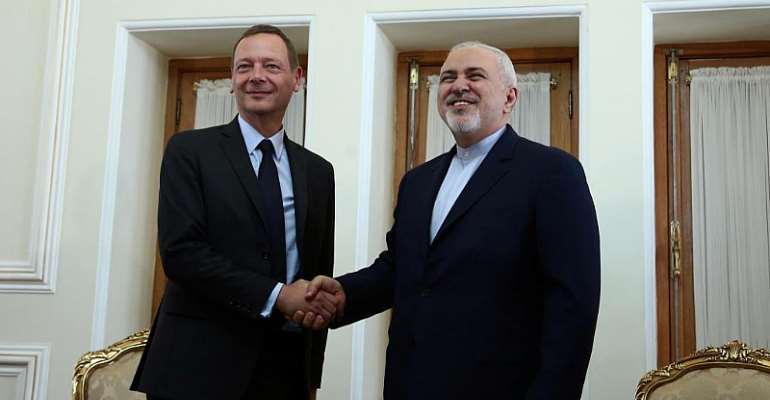 A diplomatic advisor to French President Emmanuel Macron has held talks in Tehran aimed at saving the 2015 nuclear deal and easing tensions between Iran and the United States.

The accord between Iran and world powers, the Joint Comprehensive Plan of Action (JCPOA), included relief from sanctions and economic benefits in exchange for Iran scaling down its nuclear program.

In May last year, the US unilaterally cancelled the deal, making the other partners (France, UK, Germany, Russia and China) liable to sanctions.

Last November, Britain, France and Germany attempted to save the agreement by creating the Instex trade mechanism that would allow European companies to avoid US sanctions while trading with Iran.

But the mechanism is still not operational six months after its launch and Tehran has grown increasingly frustrated at Europe's failure to act effectively.

Uranium at 4.5 percent is used in nuclear power stations; to be considered dangerous in a nuclear weapon, uranium has to be enriched to 90 percent.

Lost patience
Tehran says it has lost patience with perceived inaction by European countries more than a year after President Donald Trump unilaterally pulled the United States out of the agreement.

“Iranians continue to negotiate with the EU in order to convince them that they must abide by their obligations,” says Mohammad Marandi, an international relations professor with the University of Tehran.

“Iran is not going to accept continuing to abide by its commitments whereas the Europeans fail to do so with regards to their own commitments."

European companies involved in business with Iran have been hard hit by the US decision to walk away from the nuclear deal and re-impose sanctions.

“French car maker Peugeot had around 30 percent of the Iranian market,” says Thierry Colville, an Iran specialist with the French International Institute for International Relations and Strategies.

Europe's sovereignty at stake
In the oil sector French company Total was forced to cancel a billion euro gas deal with Iran.

“So for some sectors it has been a huge cost for European companies to leave the Iranian market."

But Colville thinks France is now fighting for Europe's sovereignty.

“The issue of the US just putting pressure on European companies telling them 'you have a choice between US and Iranian markets' is just unbearable from a sovereignty point of view,” he says, pointing out that the first aim of France's attempts to salvage the deal is to curb the spread of nuclear material. “People who say that Europe wants to save the deal just for business benefits are completely wrong.

Positive spin
Meanwhile, both Colville and Marandi are pessimistic about a positive outcome that could put the JCPOA back on track.

“Despite the fact that Macron has tried to give a positive spin to his initiatives, there is a great deal of pessimism,” says Marandi.

Colville agrees: “It is going to be difficult, because what the Iranian side wants is clearly a lower level of sanctions. They want normal economic relations with Europe, and with the rest of the world. Unless France can give a guarantee to Iran in this respect I don't see Iranians changing the strategy of gradually abandoning the JCPOA,” he says.