'Clash of Titans' battle for spot in NSMQ2019 grand finale 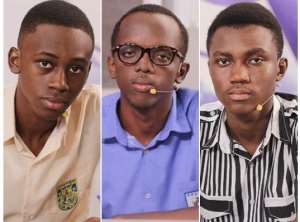 8:37 am – We are live in here at the R.S. Amegashie auditorium at the University of Ghana Business School. The first semifinal contest involving Presec, Legon, Opoku Ware School and Adisadel College is scheduled for this morning.

All the three competing schools are past winners of the Primetime show and are hopeful of adding to their tally. Before then, the victor must prove himself against the two challengers.

Students and old boys of the three schools are chanting and singing morale songs in anticipation of the contest.

Live update begins
The National Science and Maths Quiz is at the semifinal stage. “Now, it’s just who wants it most.” There are three spots at the Grand Finale and in Monday morning’s contest; one of those is up for the taking.

On a normal day, it would be easy to predict the winner but this contest is far beyond prediction. Why?

Record five-time winners, Presec, Legon take on Adisadel College; one-time winners who have been in the semifinal the past four years. They won all. If they win today, it would their fifth consecutive win.

The third opponent is Opoku Ware School, two-time winners who are bent on winning a third title.