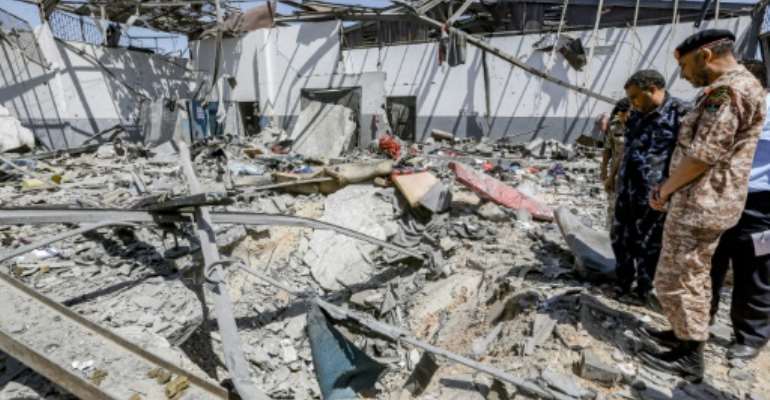 Military officers of the Libyan Government of National Accord (GNA)inspect damage at a migrant detention center in the capital Tripoli's southern suburb of Tajoura on July 3, 2019, following an air strike on a nearby building that left dozens killed. By Mahmud TURKIA (AFP)

The UN Security Council will hold an emergency meeting on Wednesday to discuss an air strike on a detention center in Libya that killed scores of migrants, diplomats said.

The meeting requested by Peru, which holds the council presidency, will be held behind closed doors from 3:00 pm (1900 GMT).

Council members will hear a briefing from representatives of the UN refugee agency and the UN political affairs department.

At least 44 people were killed when the strike hit the Tajoura detention center east of Tripoli late Tuesday and more than 130 were severely injured, the UN said.

Tajoura held at least 600 refugees and migrants, including women and children. UN agencies said they expected the death toll from the attack to rise.

Tensions have soared in Libya since forces loyal to commander Khalifa Haftar, who holds sway in the east of the country, launched an offensive in April to seize Tripoli, held by a UN-recognized government and various militias.

World powers have been divided on how to respond to Haftar's military campaign, with the United States and Russia refusing to back UN calls for a ceasefire.

The Tripoli government has blamed Haftar for the attack on the detention center.

UN envoy Ghassan Salame has called for an independent investigation and warned that the attack may constitute a war crime.