By Abdelhafid Daamache with Aymeric Vincenot in Paris 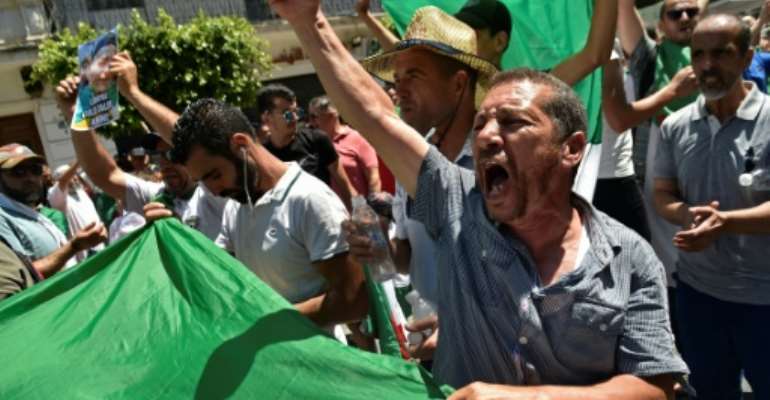 Algerians -- seen here carrying the national flag -- protested against the authorities for a nineteenth consecutive week on Friday. By RYAD KRAMDI (AFP)

Protesters thronged the heart of Algeria's capital on Friday despite a heavy police presence, vowing to push their demands for transition after the ouster of president Abdelaziz Bouteflika.

Under a scorching sun, massive crowds marched through the streets of Algiers all afternoon in the 19th consecutive week of mass protests against the North African country's regime.

Some 100 police vans -- many more than normal -- were deployed in Algiers from early morning, along with water canon and bulldozers.

Ahmed, a 54-year-old protester, said he had never seen such a heavy police presence.

"They want to scare us, but they're wrong -- fear is behind us," he told AFP.

The vehicles remained in place throughout the rally.

After arresting one man carrying the flag, police fired tear gas to cover their retreat, provoking anger among the protesters, who were quickly calmed by volunteers determined to ensure demonstrations remain peaceful.

The rally in Algiers -- and some 31 of the country's 48 regions -- dispersed without major incidents in the late afternoon, the official APS news agency said.

Demonstrations were planned for Friday night in six sub-Saharan regions of Algeria.

Mass protests sparked by ailing president Abdelaziz Bouteflika's intention to stand for a fifth term led to his resignation on April 2.

But the demonstrations have carried on, with demonstrators demanding the departure of regime insiders and the establishment of independent institutions.

The country's constitutional council was forced to cancel polls set for next week to select Bouteflika's successor, after the only two candidates -- both little known -- were rejected.

Protesters have demanded the establishment of transitional bodies, free of Bouteflika-era officials, to push through reforms ahead of presidential elections.

Army chief Gaid Salah, who has resisted such moves, has also faced persistent calls to resign.

Former prime ministers Abdelmalek Sellal and Ahmed Ouyahia are among several high profile figures detained under a probe into corruption under Bouteflika's rule.

But some in the opposition say such probes should be the responsibility of a future government, fearing that regime factions could use them to settle scores against each other.

BOST Undertakes Disinfection, Fumigation Of Its Offices
17 minutes ago