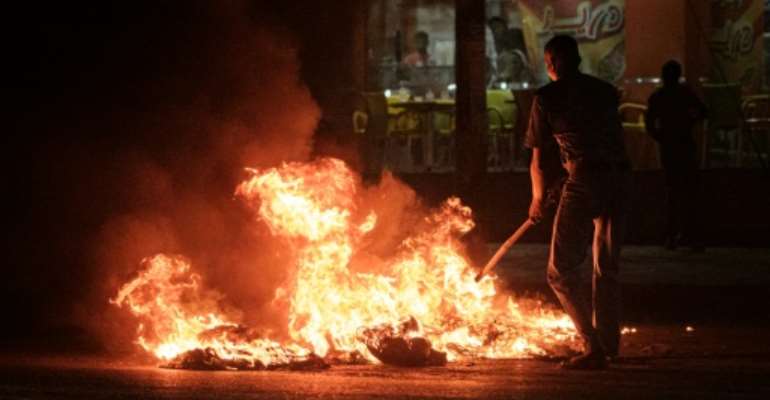 Sudanese protesters burn tyres on June 20, 2019, during a government crackdown that has resulted in 128 deaths. By - (AFP/File)

The Sudanese movement protesting for the military to hand over to civilian rule said Thursday it received a new proposal for a transition drafted by Ethiopia and the African Union.

The new proposal calls for a civilian-majority ruling council as demanded by protesters, but it fails to mention the make-up of a new transitional parliament.

"The Alliance for Freedom and Change received the draft... and will be considering the proposal to make a decision," the umbrella group said in a statement.

The move comes after Sudan's ruling generals urged mediators from the AU and Ethiopia to unify their efforts and come up with a joint proposal on the country's transition.

It entails creating a 15-member, civilian-majority governing body for a three-year transitional period.

But it makes no mention of the composition of a legislative body.

An earlier proposal drafted by Ethiopia had stipulated a transitional parliament of 300 lawmakers, with 67 percent of them from the Alliance for Freedom and Change.

On Saturday, the alliance had announced its acceptance of Ethiopia's earlier proposal but Sudan's military council expressed reservations.

Ethiopia and the African Union have stepped up diplomatic efforts to resolve the crisis in Sudan, which has been wracked by tensions between the protest leaders and generals.

The crisis was exacerbated by the June 3 bloody dispersal of a long-running protest camp outside the army headquarters in Khartoum.

The break-up of the rally came after protest leaders and the generals failed at previous talks to agree on the composition of a new ruling body and who should lead it -- a civilian or soldier.

At least 128 people have been killed since the crackdown, the majority of them on that day, doctors linked to the protest movement say.

The health ministry put the June 3 death toll at 61 nationwide.