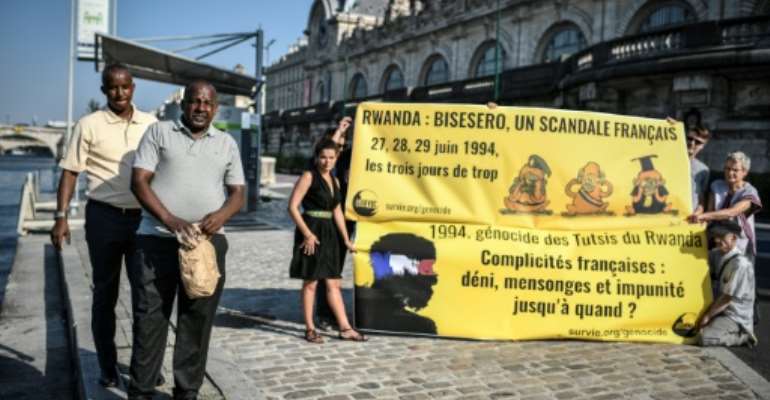 A quarter of a century ago, two Rwandan Tutsis, Eric and Bernard, looked out with anxiety and hope from the hiding places they had found to escape genocidal killers.

They thought salvation could be at hand from their plight in the hills of Bisesero in western Rwanda as they glimpsed French soldiers from Operation Turquoise who had arrived days earlier under a UN mandate.

It was June 27, 1994. But in an incident that remains deeply controversial and a source of pain in relations between Paris and Kigali, the French soldiers did not take immediate action to stop what was an impending slaughter.

The soldiers came back three days later, but this provided a window for genocidal killers to massacre hundreds of people in one of the worst single episodes of the Rwandan genocide.

Both Eric Nzabihimana, 55, and Bernard Kayumba, 50, were plaintiffs in a high-profile legal case in France that sought legal consequences. But to no avail.

Eric remembered how Interahamwe militias ran amok through the area as the wounded, mutilated by machetes, took refuge in the forests.

The return of the French soldiers on June 30, 1994, was too late for Eric's little sister, Josephine, 12, and his wife Catherine, 28 who were killed on June 28 and June 29 along with hundreds of other Tutsis.

The killings were carried out by militia allied to the Hutu government which had been backed by Paris for years.

Their deaths came towards the end of the 100-day killing spree that left an estimated 800,000 people dead, most of them members of the Tutsi ethnic minority.

"It was nearly three months that I was in the forests," Eric said.

"On the outskirts of Bisesero, I saw a convoy of lorries and I said 'maybe it's the French soldiers', so I came out of my hiding place.

"I said 'Help, we're being chased my armed killers'. They did not stop and I was obliged to put myself in the middle of the convoy."

"We showed the corpses that were building up close to us, which were still bloody. I told them that 'we thought that you had come to help us and you need to do this now. Otherwise, tomorrow or the day after tomorrow, there is going to be no-one left.'"

Eric and Bernard pour soil from Bisesero land into the Seine river in Paris. By STEPHANE DE SAKUTIN (AFP)

He accused the French military of saying on June 27 that they were "not ready today", telling the terrified people to stay in their hiding places until they returned a few days later.

They did indeed return, Eric said, on June 30 to save those people who were still alive.

"They did something, this we need to acknowledge. But what we accuse them of is only doing it after media pressure and that they should have done this before."

Bernard, who was 25 at the time, said he found the attitude of the French soldiers "incomprehensible", saying he had had to spend one month hiding with seven people in a hole dug at night.

"We were totally exhausted, we were between death and life. There were corpses here and there and we told them not to leave as then the killers would descend on us" from the surrounding hills.

"They had the means of communication... But why in three days and not an hour?"

Bernard argued that if the French had carried out their mission "and stayed on June 27, some 1,000 Tutsis would never have been killed over the course of those three days.

"For me, Bisesero is a French scandal and the French military needs to acknowledge its failure in saving the Tutsis in Bisesero."

These two witnesses, and four others who escaped, backed by human rights groups and other plaintiffs, have since 2005 pressed for criminal charges against French officers whom they accuse of neglecting their duty.

Survivors have pressed for criminal charges against French army officers, whom they accuse of neglecting their duty. By STEPHANE DE SAKUTIN (AFP)

But French judges in November 2018 rejected the bid. No one had been charged during 13 years of investigation.

French army officers including the head of Operation Turquoise, Jean-Claude Lafourcade, have in the past defended the actions of the army while acknowledging they did not immediately grasp the scale of the killing.

"I can only regret the death of the Tutsis who died during these two days," Lafourcade told the investigation in 2016. "We were very much alone."

Operation Turquoise had been deployed in Rwanda a few days earlier under UN instructions to stop the genocide that had begun in April, and which three months later had left at least 800,000 people dead, most of them Tutsis.

Rwandan President Paul Kagame has accused Paris of complicity in the genocide because of its support of the Hutu nationalist government that carried out the mass slaughter.

Paris has repeatedly denied the accusations and insists that French forces had worked to protect civilians. Bilateral relations, completely frozen from 2006 to 2009, remain tense.