Okuapemhemaa’s Palace Down To Ashes 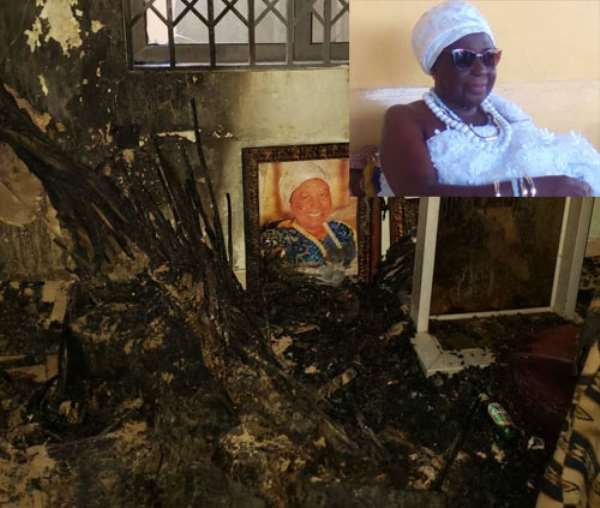 The palace of Nana Afua Nketia Obuo II, the Paramount queen mother of the Akropong Traditional Council in the Eastern Region has been destroyed by fire.

They suspect arsons behind the fire. It is coming exactly a year after her vehicle was set on fire in the same town without any arrest by the police.

There is a residential facility in the palace where she sleeps which was also set on fire.

The incident reportedly happened around 1am on Tuesday when the queen mother was asleep but she and other inmates in the palace escaped unhurt.

Four traditional umbrellas, five traditional stools, and other valuables were destroyed in the fire and it took the intervention of the Ghana National Fire Service at Mampong –Akuapem to bring things under control.

It is unclear what led to the unfortunate incident, but sources disclosed that it is linked to the chieftaincy dispute between the queen mother and a certain faction over the installation of the Okuapemhene.

In the car burning incident last year, the arsonist used a gallon of petrol and jumped over the fence wall of the house to set her Honda Civic with registration ER – 1504- 17 on fire.

Her handlers have been saying that those behind such dastardly act are well known in the town but claimed the suspects feel 'untouchable'.

Meanwhile, the Regional Police PRO, DSP Ebenezer Tetteh when contacted said their outfit has commenced an investigation into the matter.