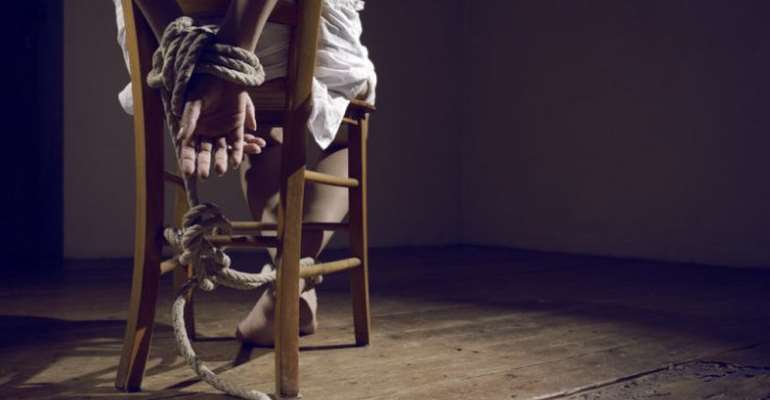 The police also rescued the victims, Eric Amponsah, 34, and Enock Addo, 26 who were being kept in an uncompleted building at the outskirt of the community.

In a statement from the police, the complainant, Emmanuel Sarpong known as Nana Hiamankyene, a fetish priest in Teye Nkwanta near Okorase made a case to the Regional CID that a gang of eight young men armed with cutlass, axe and other offensive weapons in an H100 vehicle broke into room and made away with his flat screen TV set, sound amplifier and a cash amount of GHc14,000.00 on 22nd June, 2019.

He added the suspects after taking the items and the said amount also kidnapped his son, Eric Amponsah, 34, and his taxi driver, Enock Addo, 26.

In addition, they took away his yellow and green taxi cab with registration number ER 418-16 to an unknown destination.

The statement narrated the alleged kidnappers later called on phone and demanded GHc40,000.00 ransom for the release of the victims but upon delay, the kidnappers forced Enock Addo to call his brother who sent GHc700.00 but refuses to release him after receiving the money.

Meanwhile, on 23rd June, 2019 at about 6:30am, operatives of the Regional CID and Counter Terrorism Unit personnel upon intelligence and moved to Ayisikrom where the taxi cab was abandoned in a bush.

The rescue team however employed the assistance of the village folks with Ayisikrom and its surrounding villages and about 3:00pm, the team encountered the eight kidnappers with the victims.

The police managed to arrest two of the suspects while the remaining six managed to escape.

The suspects after their arrest led the police to retrieve the stolen items and also admitted that they were recruited for the kidnapping operation by one "Igboman" who came to live in Ayisikrom recently.

Fatawu Lukeman is currently in police custody assisting in police investigation while his other accomplice, Kwadwo is under police guard at the Central hospital in Koforidua after sustaining injuries during his arrest.

The police is on the manhunt for the other suspects.