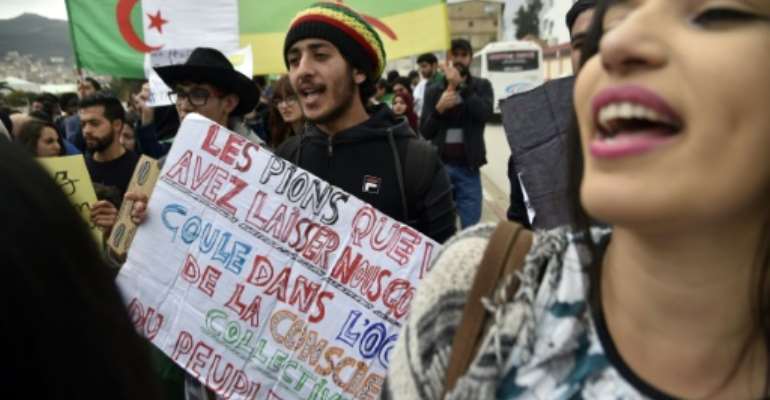 Protesters carry the Algerian flag (L) and the Berber colours side by side at a rally in March against veteran president Abdelaziz Bouteflika in the city of Bejaia east of the capital Algiers. By Ryad KRAMDI (AFP/File)

Algerian authorities on Sunday arrested 18 people who had brandished the Berber minority flag during an anti-government protest in Algiers despite a ban imposed by the military, their lawyers said.

They were detained during a mass protest Friday by Algerians demanding a political overhaul in the country where veteran president Abdelaziz Bouteflika resigned in April after weeks of demonstrations against his rule.

The suspects were accused of "undermining national unity", lawyers Noureddine Benissad and Karim Heddar said after the suspects appeared in court. If found guilty they could be sentenced to 10 years in prison.

Army chief General Ahmed Gaid Salah, who has become the main powerbroker after calling on Bouteflika to step down, this week banned protesters from holding any flags other than Algeria's during their rallies.

He was apparently referring to the Berber -- or Amazigh -- flag which protesters have been seen holding, alongside the national flag, at rallies in recent weeks.

The mountainous Kabylie region east of Algiers is home to the largest Berber community in Algeria who have long suffered marginalisation.

Supporters of the suspects rallied outside a courthouse in central Algiers to denounce their detention.

Meanwhile state television reported that a court in the city of Bejaia east of Algiers on Sunday ordered a suspected remanded into custody for allegedly "ripping up an Algerian flag".