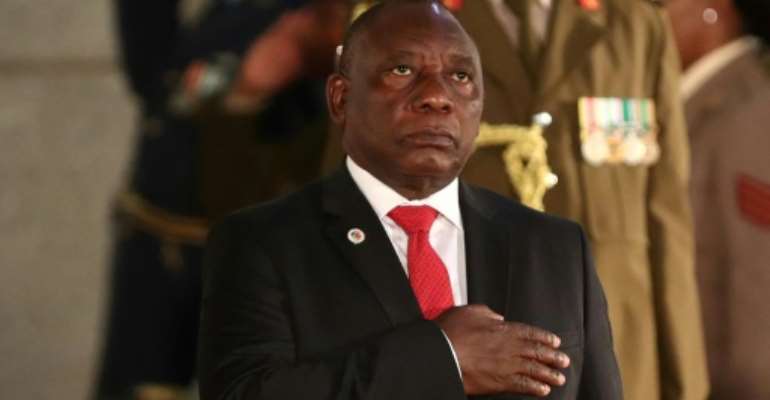 South African President Cyril Ramaphosa on Thursday described the country's economic outlook as "extremely weak" as he vowed to speed up emergency funding for the debt-laden Eskom state power supplier.

Ramaphosa delivered a downbeat economic assessment in his first state-of-the-nation address since the ruling ANC party won elections in May.

"Our country is confronted by severe challenges. Our economy is not growing. Not enough jobs are being created. This is the concern that rises above all others," he said.

Ramaphosa came to power last year and has vowed to revive the economy after the scandal-tainted presidency of Jacob Zuma.

But unemployment remains near-record highs and the country's gross domestic product (GDP) contracted by 3.2 percent in the first three months of 2019.

"The economic outlook is extremely weak," he said. "For growth, we need a reliable and sustainable supply of electricity."

He warned that Eskom faced "serious financial, operational and structural problems" and could currently only meet its financial commitments until October.

Ramaphosa announced a special parliamentary bill would be introduced to rapidly allocate "a significant portion" of the 230 billion rand ($16 billion) needed by Eskom to survive.

Ramaphosa said joblessness among the young of more than 50 percent was a national crisis. By Kim LUDBROOK (POOL/AFP)

"Eskom is too vital to our economy to be allowed to fail," he said.

The state utility, which generates 90 percent of the nation's energy, has debts of $30 billion, and its potential collapse is seen as the biggest threat to spurring growth in Africa's most developed economy.

Eskom imposed a period of rotational power rationing in February, plunging offices, factories and homes into darkness for long hours and sparking public anger at the ANC government.

"The fact that the unemployment rate among young South Africans is more than 50 percent is a national crisis," Ramaphosa said.

"More young people are entering the labour force every year... The brutal reality is that when it comes to youth unemployment, we have to run just to remain in the same place."

The ANC won the May 8 election with 57.5 percent of the vote, its smallest majority since it led the fight against apartheid rule that was replaced by multi-racial democracy in 1994.

He repeated his pledges to tackle government corruption and said he wanted South Africa to build a new city from scratch.