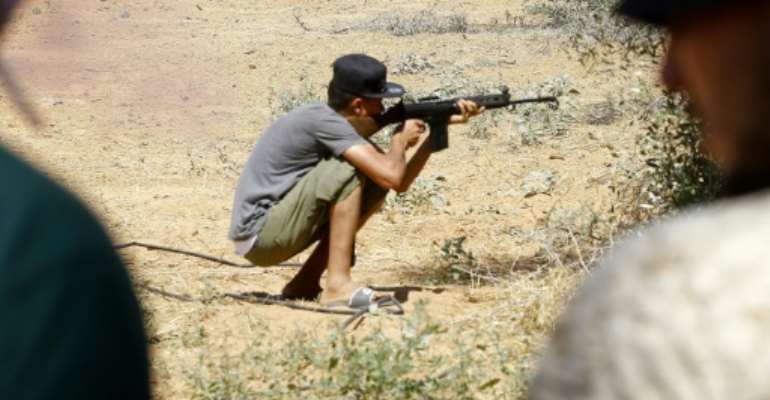 Hundreds have been killed since forces of Libyan strongman Khalifa Haftar launched an offensive in early April to take the capital Tripoli where the internationally recognised Government of National Accord is based. By Mahmud TURKIA (AFP)

Libyan strongman Khalifa Haftar has vowed to press ahead with an offensive to seize Tripoli, dismissing a political initiative by the head of the internationally recognised government.

Haftar's self-styled Libyan National Army, which holds eastern Libya and much of the country's south, launched the offensive to take the capital in early April.

But counter-attacks by forces loyal to the internationally recognised Government of National Accord have resulted in a stalemate on the city's southern outskirts.

"The situation is excellent and I call on the Libyans to ignore rumours about our withdrawal," Haftar said in interviews with Libyan news websites The Address and The Observer published overnight Wednesday to Thursday.

The offensive to seize the capital "will not stop before all its objectives are reached", he said.

Haftar said he expected his forces to achieve victory and that they would then be tasked with securing "borders, territorial waters and airspace".

"We will introduce a clear transition... with a government of national unity," he said, in a clear rejection of a plan proposed last week by Fayez al-Sarraj, the head of the Tripoli-based GNA.

Haftar said his plan would revive the "democratic process" and include elections, a new electoral law... and a new committee to draft the constitution" -- much like what Sarraj proposed.

Sarraj said Sunday his initiative was aimed at moving war-wracked Libya beyond eight years of chaos and would involve "simultaneous presidential and legislative elections before the end of 2019".

He also proposed a forum that would be attended by all key players in the country as well as "supporters of a peaceful and democratic solution", but did not name Haftar.

The military strongman said his rival's proposal "lacks seriousness and elements capable of solving the crisis" that has plagued Libya since the 2011 ouster and killing of dictator Moamer Kadhafi in an uprising.

Since the Haftar's forces launched the offensive to seize Tripoli on April 4, at least 653 people have been killed, including 41 civilians, while more than 3,500 have been wounded, according to the World Health Organization.

The UN says more than 94,000 people have been displaced by the fighting.

Haftar, who refuses to retreat, insists he is fighting "terrorists" and seeking to rid the country of "corruption".