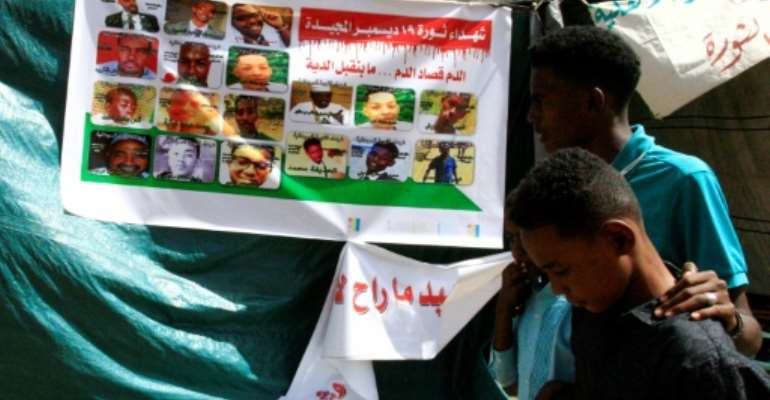 Dozens were killed in a crackdown on protesters in Sudan which witnesses and demonstrators claim was carried out by members of the feared paramilitary Rapid Support Forces. By Ebrahim Hamid (AFP/File)

A top Sudanese general said Thursday that the mastermind behind a deadly crackdown on protesters has been identified, but refused to name him saying it would impact a probe into the raid.

Crowds of protesters were violently dispersed on June 3 by men in military uniforms, shooting and beating demonstrators who had participated in a weeks-long sit-in outside the army headquarters.

Protesters and witnesses allege that the crackdown was carried out by members of the feared paramilitary Rapid Support Forces, whose commander Mohamed Hamdan Dagalo is the deputy chief of the country's ruling military council.

But Dagalo, widely known as Himeidti, said on Thursday that an investigation into the crackdown has so far led to the identity of the man who planned the raid.

"We have identified the man responsible" for dispersing the protest camp, Dagalo said without naming the individual, adding "there's no need to impact the investigation".

"Whoever it is, whether from regular forces or a civilian, will be brought to trial. The investigation will be transparent and the trial will be public."

The military council has steadfastly denied it had ordered the dispersal of the sit-in.

On Thursday also defended Rapid Support Forces saying anybody could wear the unit's uniform as it was easily available in the market.

"We arrested a general yesterday for distributing IDs of the RSF," Dagalo said.

"We have also arrested 23 people in Port Sudan who were not RSF members but who were wearing RSF uniforms and checking people."

Dozens were killed and hundreds wounded in the June 3 crackdown, launched days after protest leaders and generals failed to reach an agreement over who should head a new governing body -- a civilian or soldier.

The generals, who seized power after the army ousted longtime ruler Omar al-Bashir on April 11 following a popular uprising, have so far resisted to transfer power to a civilian administration.

On Wednesday, the chief of the military council, General Abdel Fattah al-Burhan called on protest leaders to resume talks without any conditions.

Protest leaders have expressed readiness to resume talks but on certain conditions.

They insist an internet blackout imposed after they launched a civil disobedience campaign this month be brought to an end.

They are also seeking an international probe into the killings and the acceptance of all earlier agreements reached in previous negotiations with the generals prior to the crackdown.