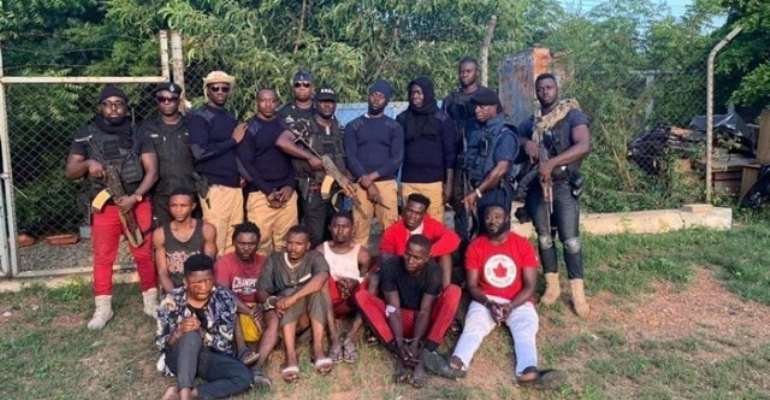 The prosecution told the court that in March this year, Sampson Aghalor Romeo who had been in Ghana for some time, struck acquaintance with Yussif Yakubu and the two became friends as a way to lure them.

In the course of the friendship, Romeo discussed the idea of engaging in kidnapping to which Yakubu agrees to assist him. Showing his commitment, he assisted Romeo to procure a pistol.

In furtherance of executing their plan, Romeo went to Nigeria to recruit Ojiyorwe and Omarsar to Ghana in May this year.

Once in Ghana, the two stayed in Ashaiman in Accra for a few days before proceeding to Kumasi to meet up with Romeo. Whilst in Kumasi, the four accused persons held discussions on how to execute their plan, the court heard.

Romeo, who was the financier, gave Yakubu money to rent a vehicle, an apartment in the secluded area outside town and two pistols with ammunition for their operation.

On June 4, Yakubu contacted a car rental company at Aboabo, owned by one Abdul Raman Sulemana to hire a Toyota Corolla saloon car at a cost of ¢400, the prosecutor said.

In the evening of the same day, the four suspects on board the vehicle went around in search of victims.

Lauren Patricia Catherine Tilley and Bailey Jordan Chilly, two Canadian nationals, were in Kumasi to participate in a youth program organised by the Youth Challenge International.

The two had boarded an Uber taxi to their hostel ay Nhiayeso behind the Vienna hotel. They were accosted by the accused persons when they arrived at their destination and alighted from the taxi.

According to the police, the accused persons assaulted the victims and forced them into their vehicle amid shooting. The four accused then sped off with the victims to their hideout, which was in an uncompleted building at Kenyasi Krobo, a suburb of Kumasi.

The two Canadians were kept in an uncompleted building guarded by Ojiyorwe and Omarsar.

The mastermind of the operation, Romeo, contacted the victims’ families in Canada and began to negotiate a ransom of $800,000.

In order to create an impression to their families that they had been seriously tortured, the accused persons smeared blood all over the victims and on the floor of the building.

They then took pictures of the blood-soaked victims and forwarded same to their families in Canada to compel them to pay the ransom.

On June 11, a National Security team headed by Col. Michael Opoku acting on intelligence, arrested Yakubu before proceeding to arrest the others from their hideout at Kenyasi-Krobo, the prosecution told the court.

Abdul Nasir and Seidu Abubakari were subsequently arrested when they were mentioned by the accused persons as having taken part in the plan to kidnap the victims.