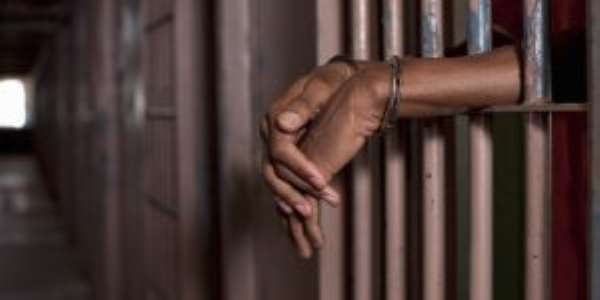 A 23-year-old female ex-convict has been arrested by the police for allegedly stealing a nine-month-old baby boy at Agona Swedru in the Central Region.

Interestingly, the suspect, Patience Gordor was sentenced to 12 months imprisonment for a similar offense a year ago.

She stole the baby boy last Sunday, June 8, 2019, a day after she was released from the Nsawam Prison.

She is currently in police custody assisting the investigators with information.

Patience on the day of her release from prison, Saturday, June 7, 2019 reportedly called the child's father, Pastor James Ayesu, the head pastor of Salvation House of Prayer Ministry at Nsusoso, a suburb of Agona Swedru and introduced herself as a relation who is stranded in Agona Swedru.

She further told him that she had given money to someone to rent a place for her to stay but could not locate the said individual.

Pastor Ayesu, invited the suspect home to understand her situation better since he had initial doubts about the narrative by the suspect.

In an attempt to convince Pastor Ayesu, the suspect managed to mention the names of some external relations of the Pastor, which convinced him that he was related to the suspect.

The suspect subsequently informed the Pastor of her decision to join him to fellowship in his church.

On that fateful day, when the church service ended, his wife who wanted to pass by the market to buy some foodstuffs left the nine-month-old baby in the care of her 14-year-old daughter and the other siblings together with the suspect and asked them to go home.

Although the parents warned the children not to give the baby to the suspect upon reaching home, she managed to convince the elder daughter to hand over the baby to her under the pretext of buying the baby and her seven-year-old sister food since they were hungry.

When the parents got home and were informed that the suspect has stepped out with the baby and his sister to buy them food, they became alarmed and suspected foul play.

They quickly rushed to the various lorry stations in search of the suspect and fortunately, after a long search, they found their seven-year-old daughter at the PROTOA station popularly referred to as 'Osama' station and when they asked her about the whereabouts of the baby, she said that the suspect had bolted with him.

Subsequently, they lodged a formal complaint at the Swedru Police station and an alert was sent to all police stations across the country to fast-track the arrest of the suspect.

Confirming the arrest of the suspect to the media last Friday, the Crime Officer of the Swedru Divisional Police Headquarters, Chief Superintendent Alex Buabin, said that the suspect upon a tipoff was apprehended at her hideout in New Edubiase in the Ashanti Region by the New Edubiase Police last Thursday.

According to him, the suspect has since been transferred to Agona Swedru for interrogation and further investigations.

He stated that the baby has been reunited with the family.

In the previous incident, the Akyem Swedru Circuit Court presided over by Mr. Alexander Oworae sentenced the then 22-year-old mother of two, Patience Gordor, to one-year imprisonment for stealing a two-week-old baby boy.

She was sentenced on her own plea but begged the judge to forgive her since she had realized her folly and would never commit such a serious crime again.

Akufo-Addo commences process to remove Anin-Yeboah over $5m ...
22 minutes ago