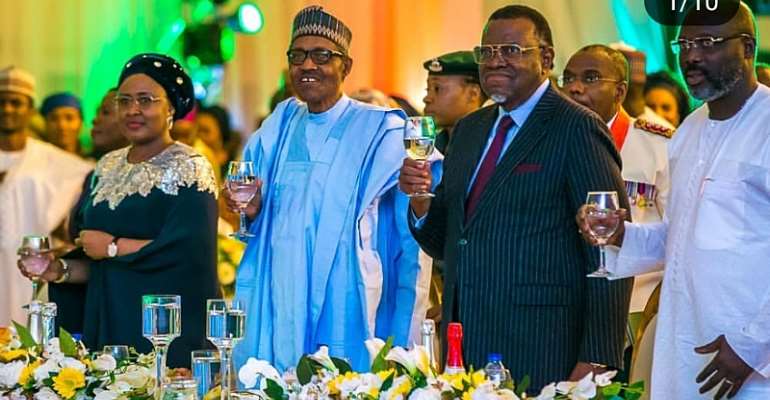 As Nigeria celebrated Democracy Day on Wednesday, past leaders warned that the country is on the edge of a precipice.

June 12 marks the 26th anniversary of the first democratic elections since 1983 when the country went under military rule.

Democracy was restored in Nigeria on 29 May 1999, but last year President Muhammadu Buhari decided to move the celebration to 12 June in honour of Moshood Abiola, whose election was annulled that year by General Sani Abacha's military junta.

National tragedy
The rebuff of Chief Moshood Kashimawo Olawale Abiola's election and his death in prison plunged the country into the greatest political crisis, creating fissures within the military, which forced the junta to relinquish power.

“There were burning fires all over Lagos, within minutes of the announcement of Abiola's death,” recalls Funke Egbemode, President of Nigeria's guild of Editors, who was a young reporter in 1993.

“Everybody felt that we had to fight this and people fought for months and years because it was like a national tragedy,” remembers Egbemode, who rose to become Managing Director and Editor in chief of the New Telegraph newspaper.

Celebration of resilience
In his speech to mark democracy Day, President Muhammadu Buhari hailed the celebration of 12 June as a recognition of the resilience of Nigeria's people.

But Professor Philip Ahere, who was the Secretary of the Electoral Reform Commission that laid the grown work of the new republic in 1993 claims that the country they dreamt of has never been delivered.

Lost battles
The fight against corruption remains one of the lost battles of the new Nigeria – one the country's citizens dream about.

In an interview to mark Democracy Day former Nigerian military and civilian leader Olusegun Obasanjo told Premium Times that the current administration had destroyed the war against graft which he claims started during his administration.

“Although Buhari was re-elected, I believe the country is on the edge of the precipice,” said Obansanjo.

“Are we taking two steps forward and one step backwards or one step sideways?” wondered the General-turned politician who like all former Nigerian Heads of State was absent at the 2019 grand event at Abuja's Eagle Square.

Nepotism
Sahara Reporters culled its front-page spread from another Obasanjo quote. “Why are Nigeria's three top leaders from the core north?" runs the headline.

“They are all from what we call the hardcore north,” Obasanjo is quoted as saying, as he expressed outrage at the Buhari's “insensitivity to Nigeria's diversity”.

"Nigerians had expected a lot of dividends to come out of the democratic rule given the background of military rule that was very hostile and authoritarian,” observes Professor Philip Ahare, Secretary of the Electoral Reform Commission that was set up in 2008.

Democratic rituals
But, as he observes in an interview with RFI, the experience Nigerians have had of democracy has been an unfortunate one.

According to Ahare, “Democracy has turned out to be more of a ritual of conducting elections every four years, with nothing happening in terms of improving the quality of life for Nigerians.”

Furthermore, he regrets the failure of subsequent governments to apply a series of recommendations made by the commission towards enshrining transparency in the electoral process.

These included protecting election officials from any influence by the executive and allowing candidates not sponsored by political parties to contest elections.

Every man for himself and God for us all
The Buhari administration's controversial record in tackling corruption is also in the limelight as Nigeria marked Democracy Day.

“If you want to fight corruption, you must address the living conditions of the people, so that it becomes unattractive,” argues Falana, who sat in the panel of an anti-corruption Summit organised by the Economic and Financial Crimes Commission in Abuja on Tuesday.

“If you have retired workers losing their lives while queuing to get their pensions, you are simply telling people in active service to take care of themselves, by engaging in the diversion of public funds,” warns the anti-corruption activist.