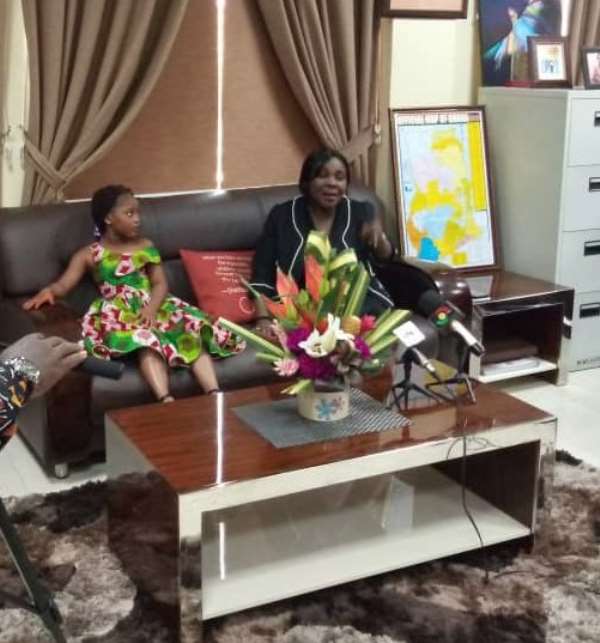 The Ministry for Sanitation and Water Resources has given Nakeeyat Dramani who won the 10th edition of the TV3 Talented Kids reality show, a 2-year ambassadorial role to champion the sanitation fight.

The decision, according to the sector Minister, Cecilia Abena Dapaah has become necessary due to the powerful message delivered by the young girl during the grand finale of the reality show which highlighted the need to protect our precious water bodies as well as the environment.

Having honoured an invitation to the Ministry for Sanitation and Water Resources on Wednesday, June 11, 2019, Nakeeyat who is only 7 years old has been presented with a citation to officially unveil her as ambassador of Sanitation.

A congratulatory message signed by Honorable Cecilia Dapaah reads “On behalf of His Excellency the President of the Republic of Ghana and the Ministry of Sanitation and Water Resources, and on my own behalf I congratulate you Miss Nakeeyat Abdul Dramani Sam for emerging as the winner of the 2019 TV3 Talented Kids Season 10 competition.

“Your extraordinary performance needs commendation. Your message touched on critical national environmental issues which many Ghanaians overlook. Your presentation highlighted the need to protect our precious water bodies and the environment as a whole.

“To this end, the Ministry of Sanitation and Water Resources is proud to appoint you Nakeeyat Abdul Dramani Sam as a Sanitation Ambassador for the next 2 years”.

Also speaking to the media on the sidelines of the short event, the Sanitation Minister explained that she is confident the move will go a long way to intensify the campaign on environmental protection.

According to her, Nakeeyat role as an ambassador will allow her to reach a lot of people particularly her age group.

The minister noted that the fight against sanitation can best be won when the minds of the younger ones are prepared towards the future.

In addition, she called on the entire citizenry to ensure self discipline and the individual role to report people who tend to engage in activities which pollutes the environment.

“We need to tell our own story, we need to discipline ourselves, we need to also make sure that others don’t pollute. When you see something going on, like the President said don’t be a passive citizen. Be an active citizen”, Honorable Cecilia Dapaah stressed.

Nakeeyat will be mentored on sanitation to effectively play her role as an ambassador of sanitation in the country.

The Ministry is expected to roll out plan for her in the coming weeks as part of effort to intensify the fight against littering and indiscriminate disposal of refuse.