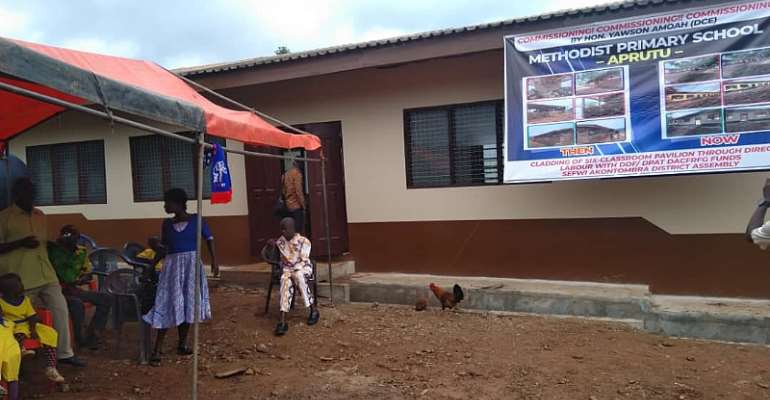 The District Chief Executive for Sefwi Akontombra, Mr. Amoah Yawson has on this day as part of his pledge to the good people of Sefwi Aprutu commissioned a six-unit classroom block. The project received thunderous applaud from the community.

Both parents and chiefs had in the previous years placed a humble request for same to be done but to no avail under the National Democratic Congress member of parliament for Sefwi Akontombra, Hon. Herold Kobbina who witnessed a tenure of twelve years as a member of parliament.

Mr Yawson Amoah used the said opportunity to reiterate his call on students in Sefwi Aprutu to have time for their studies in order to benefit from the free senior high school introduced by his government under the able leadership of Nana Addo Dankwa Akufo Addo whose aim is to ensure that, no single Ghanaian child is denied access to secondary education due to stated reasons. The District Chief Executive, in addition, donated three sets of computers to the school to enhance ICT studies.

In attendance were parents and chiefs who placed a clarion call on the DCE for Sefwi Akontombra to as a matter of urgency, consider one of their challenges in the area of network and chip compound for minor health care delivery and communication. The District Chief Executive in his closing remarks assured the good people of Sefwi Aprutu of working assiduously together with His Member of parliament for Sefwi Akontombra, Hon. Alex Tetteh towards their basic needs.