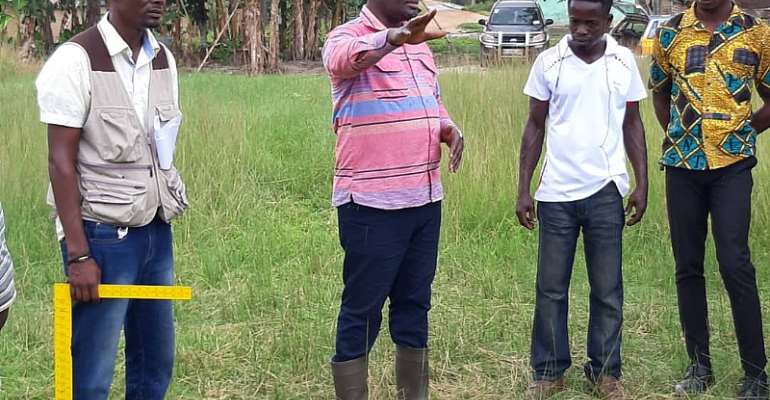 The District Chief Executive (DCE) of Amenfi Central in the Western Region, Hon. Patrick Hodson Amponteng has embarked on a familiarization tour to a number of ongoing developmental projects initiated by his administration and also some projects started by his predecessor.

Hon. Amponteng was accompanied by some journalists and some technocrats at the Assembly including some Assembly members

The District Chief Executive (DCE ) first visited Manso Amenfi, the District Capital where he inspected a new one-storey building being funded by the District Development Fund ( D.D.F.) to be used as the District Police Headquarters.

In an interview with the Media, Hon. Amponteng revealed that the project is expected to be completed by the end of December this year.

He said it is the vision of President Akufo-Addo to reduce the crime rate to the minimal.

He call on all heads of the Security Council in the District to take security issues seriously to achieve the vision of a safe and secured country.

He, therefore, seized the opportunity to advise the people of Amenfi Central to volunteer in furnishing the Police with crime-related information to enable them fight crime in the District.

The DCE then moved to Antobam a farming community in the District with his entourage to perform a sod cutting ceremony for the construction of a six-unit classroom block funded by the Assembly with their Internal Generating Fund (IGF) with support from the community folks.

In performing the sod cutting, the DCE urged the contractor to complete the project on time for the school children to move in from the old block which is not safe.

Amponteng next visit was Kofiekrom, a small farming community also in the District to inspect an ongoing 3-unit classroom block, with additional offices for a Headteacher and a storeroom for Kofiekrom D/A Junior High School.

The DCE briefed the Media that the vision of the New Patriotic Party's Government is to assist deprived communities in the District such as Senkrom, Nsuta Nkwantaman, Manukrom among othersd by constructing a Junior High Schools closer for them instead of walking long distances to Kwamang.

The DCE commended all the stakeholders in the community for their communal supports and donated quantities of bags of rice, cooking oil and an undisclosed amount to motivate them.

The DCE and the entourage finally moved to Ashiem another farming community in the Wessa Amenfi Central to inspect progress of work of another 3-unit classroom block meant for the Junior High School.