The legacy of Iran's Khomeini 30 years after his death 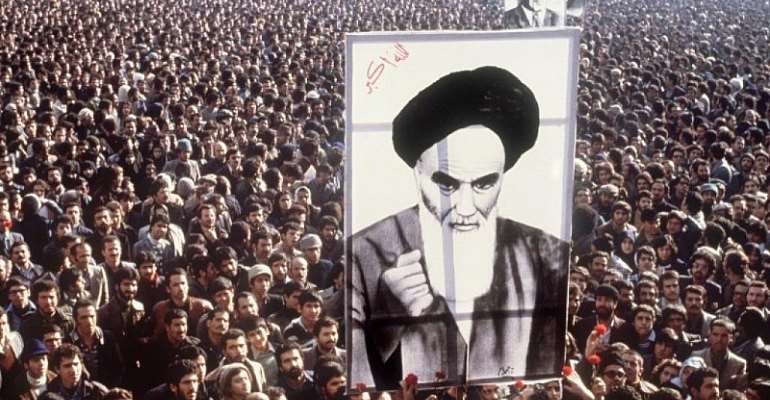 The man who brought the Iranian revolution and set in place the Islamic Republic of Iran died on 3 June 1989, 10 years after establishing the country's theocracy and ending the reign of Shah Mohammad Reza Pahlavi.

In the 30 years since his death, the legacy of Khomeini is still very much palpable, especially since his governing system remains intact.

Durability
There will be varying interpretations of what legacy Khomeini left and what he did for the country.

But one thing that many can agree on is the durability of the Islamic Republic, which has lived far beyond any people's expectations, according to Sanam Vakil, a senior research fellow at Chatham House where she heads the Future Dynamics in the Gulf project and the Iran Forum.

Khomeini put in place a system, called velayat-e faqih, that gives power to the Shia clerics. The concept has existed as a theory for over a thousand years, explains Seyed Mohamed Marandi, a professor of Political Science at the University of Tehran.

“But what Khomeini did was...to help formulate a constitution where this theoretical concept would be able to be put into practice,” adds Marandi.

In this system, the highest political figure in the country is also a religious authority, therefore binding religion with state.

The other dimension to the durability of the system is its reliance on institutions rather than individuals.

“There have been elites that have come and gone," notes Vakil. "Of course some are still there, like Iran's supreme leader Ali Khamenei, who has been in power for 30 years, but it's a system that has strong institutions and without those strong institutions, I don't think the Islamic republic would be as resilient”.

Resilience
Khomeini's Iran has also maintained its presence on the world stage, resisting efforts to topple it.

“We have to keep in mind that almost immediately after the revolution – and even during the revolution – the Americans and their allies constantly tried to undermine it. They then supported Saddam Hussein in an eight year long war,” explains Marandi.

The Iran-Iraq war, which broke out in 1980, saw more than 500,000 casualties on the Iranian side, though there have been no official figures from either country. But the war quickly drew Iran into a conflict just after it was beginning to roll out its new republic.

The war was “instrumental in allowing the revolution to be consolidated” and helped create “a mentality of resistance amongst the political establishment”, according to Vakil – one key reason why the Islamic Republic has survived.

It also helped steer Iran from being a so-called “dependent country” that was heavily influenced by the United States and the United Kingdom, to one where decisions were made in Tehran by Iranians, says Marandi.

Social justice
Prior to the revolution in 1979, the rates of literacy were quite low, especially for those living in traditional or non-urban areas.

While Iran under the Shah was more western in its thinking, the bulk of opportunities were for those who could afford it, hence the growing division between the economic classes.

“The majority of Iranians, especially women, were uneducated,” explains Marandi. “Now you have universal education. This was all established after the revolution."

Literacy rates have gone up since the revolution, with Khomeini making it a goal to introduce universal education to both women and men along with access to health through elements of social justice.

Under the Shah, there was also an effort to encourage women to go to school says Mehdi Zakerian, assistant professor in Human Rights at Islamic Azad University in Tehran. But that effort did not extend to those living in traditional families who were less inclined to send their daughters to school.

“But after the revolution, the Islamic government brought change to tradition in the family. We have a lot of Iranian families today who send their girls to universities in the far cities of Iran,” adds Zakerian.

In addition to creating a social system, Khomeini sought to root-out corruption, a key ailment of Iran under the Shah.

“He promised the Iranian people to clean up corruption...to have a good government with Islamic rule. But today we find a lot of corruption cases in the judicial courts,” laments Zakerian.

And despite the durability of the Islamic Republic, Marandi also points out that “in recent decades, some of the elites have forgotten the legacy with regards to social justice”.

Sanctions may not help the situation, but Iranians continue to face unemployment at a rate of nearly 12 percent, along right rising prices and ultimately corruption that is seen as a source of many daily problems. In response there have been general strikes and daily protests against the growing hardships.

Cracks appearing?
Since Khamenei took over from Khomeini 30 years ago, the system has failed to deliver the promises of better economic opportunities and social justice, says Vakil.

With the growing rise in an educated population comes the inevitable change of people's priorities and ultimately ideology.

“Revolutionary values and religious ideology are also waning," adds the Chatham House analyst. "The population is much more cynical after decades of seeing its leadership use religion for political purposes."

This pushback can be seen through popular movements online, particularly women now pushing back against Islamic law, or the youth that are “less respectful of an ideology that they see as repressive and frustrating”, adds Vakil.

Added to that, a division has grown between the conservatives and reformists leaders, says Clément Therme, a research fellow on Iran at the Institute for Strategic Studies.

“Since the green movement in 2009 most of the reformists were excluded from the system because they felt that it could not survive in its original form, under Khomeini, and that major reforms wto guarantee the survival of the state” adds Therme.

As we look back at the legacy of Khomeini, the real deciding factor in this new Iran will be what the new generation will do.

Growing access to social media and online resources means the youth may also want to see change, which is why Khomeini's legacy is also a contested one.

“His reputation and his ideals are more of a reflection of the pragmatism of politics in Iran today,” adds Vakil.