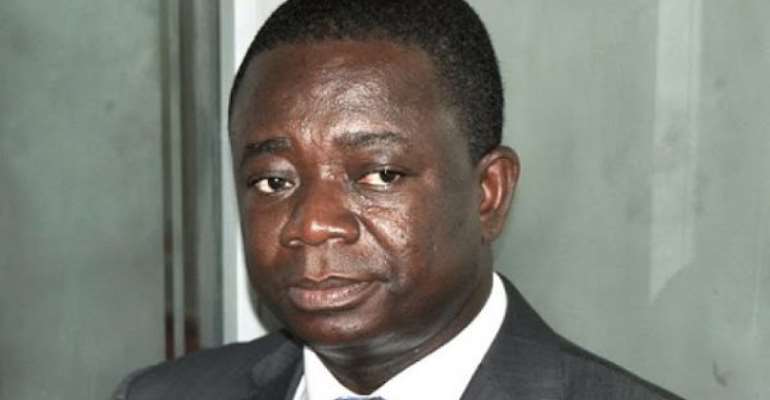 Dr. Yaw Adu-Ampomah, a state prosecution witness who appeared before an Accra High to tell how Dr Stephen Opuni was corrupt at the Cocobod as Chief Executive, rather ended up exposing his own complicity in the fertilizer deal.

Under cross-examination by Defence counsel for Dr Opuni, the prosecution witness was brutally exposed for having deeply involved in over US$268 million fertilizer deals with a sole-sourced contract of fertilizer to Cocobod for the 2011/12 cocoa season.

Reports from the High Court making rounds on social media and gathered by Modernghana, indicated that, during cross-examination, lead Defence counsel, Samuel Cudjoe, made the Court understand that Dr Opuni trial is purely political and not criminal and that, the real culprits are walking free and are making effort to implicate his client.

It emerged from the court last Tuesday that, with an effort to hit a target of one million metric tonnes, COCOBOD applied and got approval from the Public Procurement Authority to sole source the purchase of fertilizers from three companies in three tranches – February, June and November – in 2011 at the tune of US$264,495,688.53.

Despite spending that huge sum of money on the cocoa production, COCOBOD missed its target. It was able to achieve a paltry 879,343 tonnes for the 2011/12 season, prosecution witness Dr Adu-Ampomah admitted to these figures during cross-examining on Tuesday.

This was revealed after Dr Adu-Ampomah, gave evidence in chief as prosecution witness where he stated emphatically that the practice at COCOBOD was that fertilisers are only purchased through competitive tender where the products are advertised in the dailies. It has however turned out in court that his claim was palpable falsehood and an attempt to throw dust in the eyes of the court.

Dr Adu-Ampomah was testifying against former COCOBOD Chief Executive Dr. Stephen Opuni and businessman Seidu Agongo who are facing charges of engaging in single source during his term in office between November 2013 and January 2017.

Strangely, defence counsel produced copious documents from COCOBOD contradicting the claims of the witness, getting Dr. Adu-Ampomah to go back on his words to virtually doused the charges of sole source leveled against the accused.

At the previous hearing of the case, Dr Adu-Ampomah admitted having personally written letters to PPA and secured approval to single source the purchase of these fertilizers in question. He also conceded being copied in several correspondences with PPA and requests granted to single source fertilisers during his first term at COCOBOD as Deputy Chief Executive in charge of Agronomy and Quality Control.

Interestingly, cocoa production further went down to 835, 466 metric tonnes for the 2012/13 from 879,343 tonnes recorded in the previous year although substantial quantity of fertilisers were used in these seasons.

Dr. Adu-Ampomah who retired from COCOBOD and now a special advisor to the Minister of Food and Agriculture told the court that the decline in yield was as a result of tired cocoa trees.

According to him, because the 2010/11 cocoa season production was high, it was expected that yield will dip in the subsequent years.

But documents tendered in court indicated good yield shooting up to 896,221 metric tonnes in the 2013/14 cocoa season during Dr Opuni’s first year in office as COCOBOD Chief Executive.

Q: Having occupied positions at cocobod, you are aware of the factors that affect cocoa yield.

Q: give us some of the factors.

Q: You have mentioned more than 5 factors that affect cocoa yield and as an expert, you will agree with me that not a single fact can be associated to crop yield.

Ans: Yes my lord. All of them work together and so if one is ignored, it can affect yield.

Q: So you will agree with me that the fact that you have purchased enough fertilizer and applied them without the contribution of the other factors will affect yield.

Ans: My lord, if the fertilizer is compromised, it will affect yield.

Q: If you have good fertilizer but uneven rain distribution, it can affect yield.

And: Yes my lord.

Q: In fact if the fertilizer is good with good rainfall but if there is pest incidents, it can also affect yield.

Ans: yes my Lord. There are several other factors

Q: Dr, being an expert, you may know the total production of cocoa in Ghana at least from since you worked at cocoa board as deputy CEO A and QC.

Q: You will agree with me that though cocobod purchased a lot of fertilizer in 2011/2012 season there was a shortage of over 140 thousand metric tonnes.

Ans: Yes, my Lord. As I said if cocoa gets a high yield in a particular year and if care is not taken it will reduce the following year. We foresaw it and that is why we increased fertilizer procurement.

Q: The question is, in spite of purchasing more fertilizer in 2011, there was a shortage the next season from 1million metric tonnes to 800 plus metric tonnes.

Ans: Yes, but that is why I said if the cocoa trees are not given enough fertilizer, production can fall

Q: Dr, in 2012 /2013 seasons, in spite of fertilizers purchased, the total production again

Ans: Yes, as I said if a cocoa tree gives you such unprecedented yield in 2010 it can reduce

Q: Dr, you can’t attribute the fall to only one factor.

Ans: Yes, my lord but it was the major factor

Q: You know that in the first year of Dr Stephen Opuni, cocoa production went up to 896,221 tones in spite of the fact that less fertilizers were purchased as compared to 2011/12 season.

Ans: My lord know, the credit will go for the previous crop season.

Q: So Dr, with that analogy, if you are right, then the 2016/17 yield of 969, 511 metric tonnes should be attributed to the application of 2015/16 cocoa season [which included the use of contentious Lithovit Liquid Fertilizer].

Q: You also know the weather is still a factor.

Q: Dr Adu Ampomah, being conversant with rain you will be aware of the worldwide el nino.

Q: It is an extreme and unusual weather pattern.

Q: in fact you are aware that it is sub-characteristics of prolonged try weather.

Q: In 2014, the el nino weather was experienced in Ghana and affected agriculture in general.

Ans: My lord, I wouldn’t know.

Ans: My lord, that is debatable.

Q: You informed this court that after you retired from Cocobod in 2013, you were still involved with the cocoa industry.

Ans: Yes it can affect

Q: If indeed you were with cocoa Abrabo pa which deals with livelihood of cocoa farmers, you would know this.

Ans: My lord this is a weather situation that affects the west coast of Africa and eastern coast of Latin America. It can affect yield sometimes.

Sam Kudjoe: My Lord, I had wanted to get here on a good note but you made it seem I was delaying.

Sitting was adjourned to June 12, 2019 for cross-examination to continue