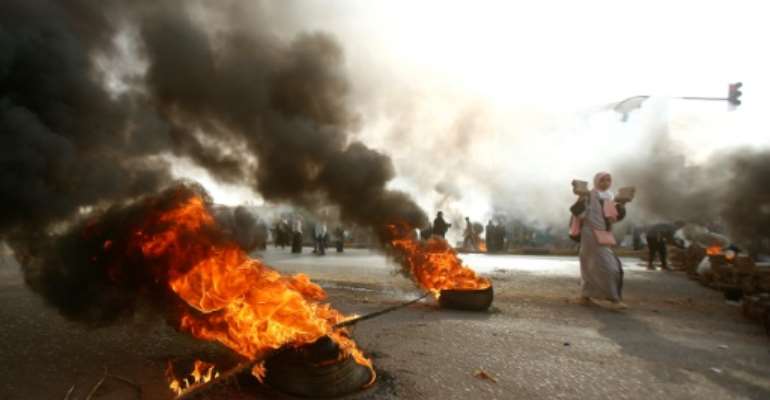 Sudan's military rulers forcefully broke up a weeks-long sit-in outside Khartoum's army headquarters on Monday leaving at least 30 dead and hundreds wounded, doctors close to the protesters said, as gunfire rang out and black smoke shrouded the city.

Heavily armed members of the paramilitary Rapid Support Forces were deployed in large numbers along the capital's main roads.

Manning pick-up trucks mounted with machineguns, they guarded entrances to the bridges that cross the Nile and moved in convoys around the city ahead of evening prayers.

UN Secretary-General Antonio Guterres condemned the use of excessive force by the security forces against protesters and called for an independent investigation.

The Central Committee of Sudanese Doctors, which is close to the protesters, said the toll "massacre" had "risen to more than 30," with "hundreds of wounded".

An eight-year-old child was among those killed, said the committee.

It reported a "large number of critical casualties" and called for "urgent support" from the International Committee of the Red Cross and other humanitarian organisations to help the wounded.

Beyond the heavy presence of security forces, the streets of the capital were largely empty Monday afternoon, with sporadic cars circulating and a few people walking, because public transport had shut down, an AFP correspondent said.

Many streets remained blocked off by demonstrators who had erected barricades made from stones, tree trunks and burning tyres, although the protesters had departed.

Many shops, pharmacies and businesses were shuttered around the city.

But protest leaders said the main protest site in Khartoum had been cleared.

It said another hospital near the site of the sit-in had been surrounded and that volunteers were prevented from reaching it.

The military council "did not disperse the sit-in by force," its spokesman said.

Tibor Nagy, the assistant secretary of state for African tweeted that it was a "brutal and coordinated attack, led by the Rapid Support Forces militia, that mirrors some of the worst offences of the Bashir regime".

He also called "on the Transitional Military Council to protect the civilians from further harm," a statement said.

Amnesty International urged the international community to consider "all forms of peaceful pressure, including targeted sanctions on those members of the Sudanese transitional authorities responsible for this morning's violent attack on sleeping protesters."

The Alliance for Freedom and Change announced "the end of all political contact and negotiations with the putschist Council" following the deaths, even as neighbouring Egypt appealed for the two sides to talk.