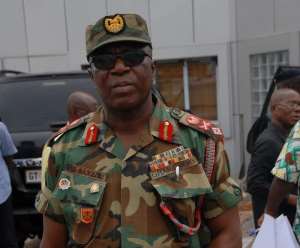 I have since been tongue-tied upon hearing the shocking news of the sudden demise of this great icon.

It is indeed true that this gentleman has served this country with all his heart. He has left a great legacy as far as his profession was concern.

Major General Vib Francis Sanziri is a native of Guo at Nandom in the Upper West Region of Ghana. He belongs to the "Kussielle clan", the clan noted to have the lion's strength.

Commander Sanziri was a very intelligent but humble man. His respect for human was non-discriminatory. He respected both young and old irrespective of your status in life.

I recall anytime this man came home, he walked into my yard with his brother Paul to greet us. He did same to members in the other yards. Langmwe Yir (build together house) is a big house with gallant heros at Guo. Great men who have never been defeated in any war were from this house. The likes of Derbie, Deblu, Simion, Towoni among others are the names of our great ancestors. The meaning of their names is enough a justification to their greatness. The enviable attitude of commander Francis Sanziri was a true demonstration of our rich enviable traditional values. Those were attributes of a well nurtured and properly trained child in our local parlance. It was therefore not surprising, commander Francis Sanziri rose through the ranks and files of the Ghana Armed Forces to his current position. That confirmed the saying that a man who remembers where he is coming from will never suffer defeat.

Indeed it is still fresh in my mind, the level of intelligence and maturity demonstrated by the world's icon, commander Francis Sanziri, anytime he appeared in open camera as the NADMO Boss. I congratulated him on his appointment and commended him through WhatsApp anytime I watched or listened to him on television or radio. At his lesser times, he appreciated my compliments and expressed hope for greater and better future going forward.

True to his words, he was appointed into his current position by current government. There again he performed beyond expectation.

My last encounter with him before the uninvited human's enemy visited him was when I won my election as the Nandom Constituency Deputy Youth Organiser (NDC). He was elated hearing that good news about me. He quickly sent me a congratulatory message and wished me the best in my political career and all my endeavours. Commander Francis Sanziri also advised me to get a good politician as my mentor so that I could learn and climb higher the political ladder.

I was more than elated for his advice and level of discernment. I never regretted to have had such a personality in my life.

The death of this gentleman is a blow accompanied by some power that nobody could withstand. In fact, his death is synonymous to the falling of an oak tree. It was so sickening hearing the sad news of this epitome. It is heartbreaking such a kind, loving, brilliant, hardworking and humble gentleman is no longer with us. Such a prolific, honest and result oriented gentleman should not have left us so early God! The likes of this man are uncommon in our country. How do we get his experience? From whom do we the young ones learn? This is too a bitter pill to swallow, God. What a painful loss. Why now, God? Anyway, You know best and needed him most. But the truth is that it has been uneasy to accept that Major General Vib Francis Sanziri is no more with us.

I pray that the resurrection of our Lord Jesus Christ find his soul a resting place in His father's house. My condolences to the wife and the children. May the soul of Major General Vib Francis Sanziri rests in perfect peace. Amen.