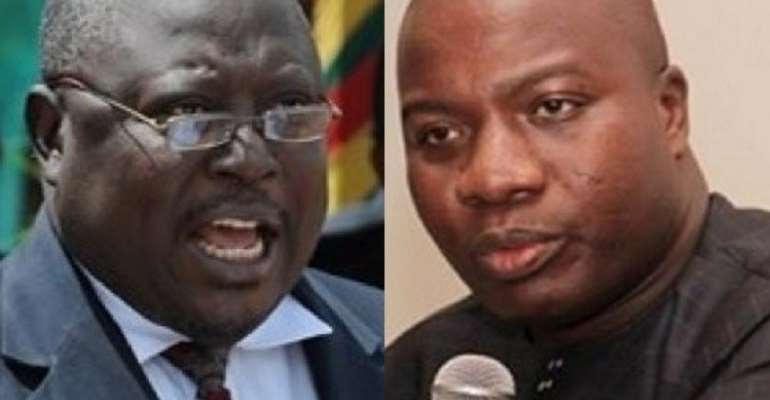 According to the youth, the allegation of corruption and subsequent lawsuit against the Bawku Central lawmaker, is beyond what the Special Prosecutor is embarking upon and that he is pursuing personal vendetta case using statre arms.

In a press statement signed by Rauf Tangnaba, Deputy Youth Organizer, dated 30th May, 2019 and copied to all media in the country, the NDC youth described Amidu action as disappointing.

The office of the Special Prosecutor has initiated court action against the former Minister of Environment and Science for evading tax to the tune of GHc36,000.00, emanating from second hand vehicles he purchased under state tax exemption but later sold.

But the angry youth of Bawku Central said, even though as members of the great NDC that profess probity and accountability, they believed Amidu Rambo style lawsuit to fight corruption in the system is pure vendetta and selective justices against their beloved MP, Mahama Ayariga.

The Youth said, Hon Ayariga is not an ordinary citizen who thinks he could only survive through cheating the state with tax evasion and that he has served the nation diligently in different capacity and would be the last Ghanaian to cheat the state where he draws his salary as a legislator.

Mahama Ayariga they said, has served the nation from an elected Assemblyman to a Member of Parliament for three times and as well served as Press Secretary and Spokesperson to late former President John Atta Mills of blessed memory and a Deputy Minister of Education, Minister of Information, Minister of Youth and Sports and Minister of Science Technology and Innovation under John Mahama.

With these impeccable records, the Bawku youth said, they found it inconceivable that Martin Amidu would want to pursue an agenda to tarnish the reputation of Ayariga over what they described as "an age old personal feud against the people of Bawku for choosing the latter over him as a suitable parliamentary candidate for Bawku Central a decade ago."

They reminded the Special Prosecutor that, it was not Mahama Ayariga who instigated the rejection of his parliamentary ambition but rather the elders and leaders of the NDC in Bawku that advised he should consider the now Builsa North seat instead of Bawku Central Constituency.

In their view, if Amidu is mindful of fighting corruption, he should have been bold to start prosecuting persons under the current government whom they alleged, "are plundering the taxpayers sweat and resources of the country" and not vexatious and irritating venture against Ayariga.

They mentioned several cases of alleged grand corrupt under the current administration which have been reported to the Office of the Special Prosecutor, yet he not taking action but found it prudent to pursue a case which practical under the Ghana Revenue Authority (GRA) and not under his office.

They also described Ayariga prosecution as a face saving panic reaction by Amidu to please his paymasters and defend his fat unearned salary, following the recent public outburst on his office performance over a year, including members of the New Patriotic Party (NPP).

The NDC youth also accused Martin Amidu, of pursuing yet another personal vendetta in a case of the purchase of an ambulance worth Ghs100,000 by the Bawku Municipal Assembly with funding from the MPs Common Fund to support efforts at promoting Health Services delivery in Bawku.

They further claimed as part of schemes to make case against Hon Ayariga, the Special Prosecutor has since detained an ambulance for the past ten (10) months depriving the people of Bawku access to the services of the ambulance that was supposed to aid in saving lives in Bawku and its environs.

The youth said, they together with others within Bawku and its environs would be compelled to revolt against Amidu if he does not change his bitter attitude against the good people of Bawku.

Reopening Of Schools: Not Testing Students, Staff Dangerous,...
55 minutes ago