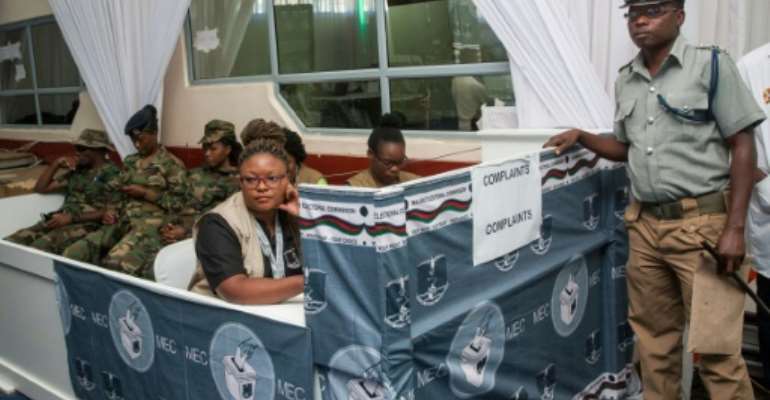 A Malawi court on Saturday ordered the electoral board not to announce the May 21 presidential election results, following opposition complaints of vote-rigging, hiking anxiety and tension in the southeastern African nation.

The High Court ordered a halt to the release of presidential results and a recount in a third of voting districts.

The electoral body had stopped releasing updated election results on Friday after it had received 147 complaints from some of the parties involved in Tuesday's vote.

The main opposition Malawi Congress Party (MCP) of Lazarus Chakwera went to court over what it claimed were irregularities in results from 10 of the country's 28 districts.

The court in the capital Lilongwe on Saturday ordered that "the announcement of presidential results is stayed until the results ... are verified through a transparent recounting of the ballot papers in the presence of representatives of political parties which contested the elections."

The commission's chief Jane Ansah said they will wait for the legal process to be "concluded before announcing the results," without saying when this might be.

Chief elections officer Sam Alfandikatold AFP they would study the "grounds for the injunction and decide if we should challenge the order".

Opposition parties have complained that figures on many vote count sheets were altered using correction fluid.

MCP spokesman Eisenhower Mkaka said they turned to the courts because of "very glaring irregularities" noticed on results sheets turned in from polling stations.

Some of the documents showed "the same handwriting coming from different polling stations which are miles apart," he said adding there was "a lot of tippexing".

"The tippex itself should be a red flag. It should be an indication of an anomaly and it should be a wake up call to the Malawi Electoral Commission that someone is trying to play some games.

"What we are seeing is a fraudulent election, the result has been tampered with."

He also said in some cases results were marked on improvised papers.

"These serious irregularities have, in fact, worsened and, in the process, the credibility and integrity of these elections have been significantly compromised," he told a news conference.

"In view of the chaos that has ensued... I am calling upon the Electoral Commission for the nullification of the aggregated vote".

His closest challenger Chakwera of the MCP had 35.44 percent of the vote, while Vice President Chilima was on 18 percent

Chakwera on Wednesday warned of alleged attempts to rig the vote, saying his MCP had conducted its own count and this, he maintained, showed he was ahead.

The European Union observer mission has described the vote as "well-managed, inclusive, transparent and competitive".