COCOBOD CEO Comments On Cocoa Not Cause Of Deforestation Is Narrow, Unacceptable—Group 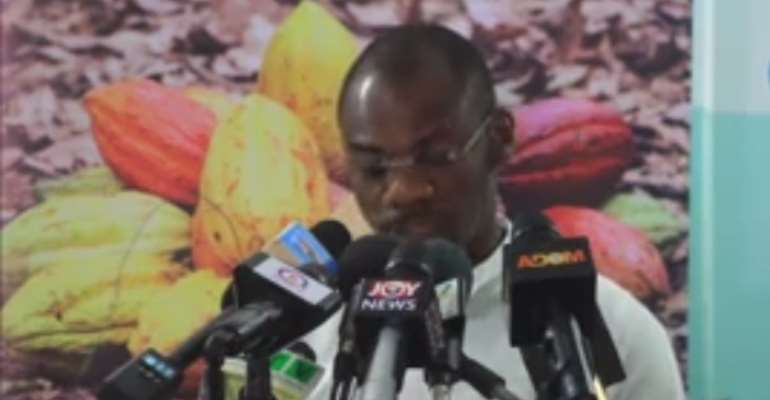 The Ghana Civil-Society Cocoa Platform (GCCP), an independent campaign and advocacy platform for civil society actors in the cocoa sector has schooled the CEO of COCOBOD Mr Joseph Aidoo to reconsider his statement about cocoa not being the cause of deforestation in Ghana.

This follows Comments by the CEO of COCOBOD at the chocosuisse General Assembly, the association that represents Swiss chocolate industry that he did not subscribe to the thinking that cocoa farming causes deforestation.

But GCCP refuted those claims indicating that all reports on forest lost in Ghana including the Ghana REDD+ Strategy, Nationally Determined Contribution document, Forest Reference Level document and Climate Change Strategy document all points to that fact that agricultural expansion contributes more than 50% to forest lost in Ghana and cocoa is no exception.

The advocacy body also indicated that COCOBOD always falls short of admitting that cocoa is a major cause of forest lost in Ghana.

Speaking at a press conference in Accra, the Convener, Mr Obed Owusu-Addai described the CEO's position as narrow and unacceptable.

"It is our considered opinion that when duty bearers and people who are supposed to champion the fight against cocoa-driven deforestation use international platforms given to them to rather denigrate and counter efforts being made, it becomes a sad thing," he stated.

He continued, "We therefore call on the COCOBOD and it's CEO to clarify their position on cocoa-driven deforestation because this current position is not supported by the facts on the ground and by their own government statistics and research."

JHS graduate appeals for $45,000 to undergo kidney surgery
8 minutes ago

$50million gathered so far for the National Cathedral projec...
52 minutes ago