Ghana Back To 'DARK DAYS' After Shutdown Of Opposition Radio Stations 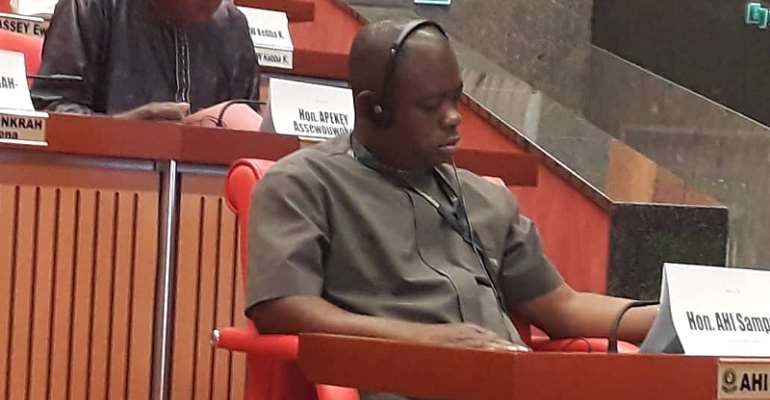 The Member of Parliament for the Bodi Constituency, Hon. Sampson Ahi, has waded into the shutdown of opposition owned radio stations Radio Gold and Radio XYZ by Ghana's regulatory body, the National Communication Authority (NCA).

The NCA closed down the two stations last week in line with the Ruling of Electronic Communications Tribunal (ECT).

Member of Parliament for Bodi Sampson Ahi has, however, taken a swipe at President Nana Akufo-Addo for taking Ghana back to the “dark ages”.

According to Boadi lawmaker Ghanaians see the President as an apostle of democracy, rule of law, human right advocate and believer of freedom of speech.

“They should start revising their notes by now because clearly, Nana Akufo-Addo is exhibiting intolerance, he is not accommodative and does not respect fundamental human rights; all that is happening under him shows his true character”, he lamented in an interview”.

As to whether the few incidents can dent his record, he responded by saying, “look at what happens at Ayawaso West Wuogon by-election, nobody has been arrested.

“The President should have acted swiftly if he wants to ensure the fundamental human right of Ghanaians, I am not surprised Nana Addo thinks he is above the laws of Ghana and nobody can do anything to him and to some extent he is right”

Especially, when chiefs and our religious authorities are not talking and are allowing only a few people in academia to do the talking.

All those who were talking during former President Mahama time are now quite, “they should not forget that if Ghana is burning today all of us will fall victims.

As to whether the President directed the action of NCA, “but who do we blame, he is the appointing authority, he appointed the Chief Executive of NCA and appointed the Minister for Communication”

Also, Radio Gold and XYZ are saying they had written and submitted their documents requesting for renewal from NCA unless NCA comes out to refute what the two radio stations are saying.

Mr. Samson Ahi lamented that the whole exercise was carried out just to ensure the press conference by the elders of the opposition party does not express their views.

“Nana Addo wanted to order them to go and close the stations down to show them that, we are in power, they should not forget that his Presidency is transient one”.