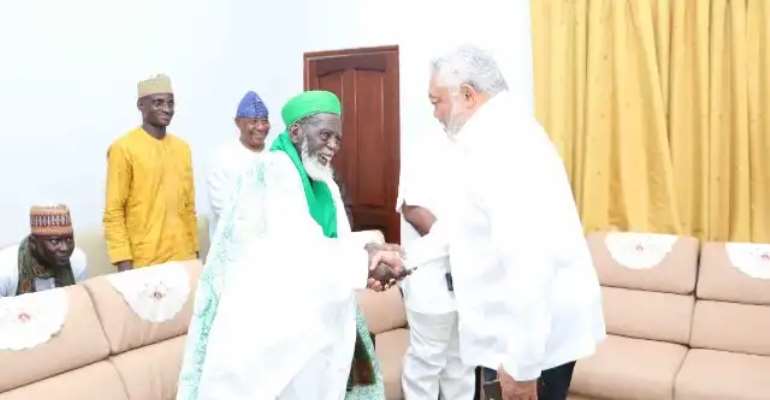 According to the National Chief Imam, it was the foresight and commitment of the NDC Founder under his tenure as Head of State that Muslims in the country got national recognition and given a National Holiday like Christians.

Sheikh Nuhu Sharabutu made these observation when paid a courtesy call on the former President as part of the celebration of his centenary birthday which fell on April 23 this year.

Speaking through one of his aides, the National Chief Imam said the centenary celebration would not be complete without a special visit and a special word of gratitude to the former President, "for his role in formalizing Muslim leadership in Ghana and instituting Muslim national holidays during his tenure as Head of State."

"It is on record that your regime institutionalized the office of the National Chief Imam, that has resulted in the intra and inter religious stability in the country. There’s no doubt that the Chief Imam occupies a powerful page in the history of religious tolerance in this country. That could not have been done without you. Your level of struggle against corruption, injustice, love for the poor, concern for the downtrodden and your stance against injustice are all appreciated. The best time to show this appreciation is the holy period of The Ramadan,” Sheikh Sharabutu stated.

On his part, Mr. Rawlings expressed his gratitude for the role the Chief Imam had played “through the trying times that helped to sustain the stability we enjoy, and we continue to pray it stays that way.”

The former President noted that while the visit and the kind words from the Chief Imam, “does him great honour, I am not too sure I deserve so much. Some of the deeds come to us through the Almighty so it is something we should thank Him for.”

He said the formalization of the office of the National Chief Imam and the establishing of Muslim holidays were long overdue at the time they happened. “God did not create human beings to be subservient to one another.”

The former President used the occasion to remind the world that there is serious injustice against the Palestinian people. He said the world was not crying out loud enough or coming out to condemn what the Israelis are doing to the Palestinians.

“It is undermining America’s political standing and morality. We’ve been too silent for too long. No amount of condemnation, spoken in words could adequately give any satisfaction to the spirit, to the soul. The condemnation of what is going on has to continue. It appears the American people will now have to wake up the way they did in defence of Mandela. The way they did to get rid of apartheid. Looking up to the presidency, the government or congress doesn’t seem to be doing much.”

“The plight of the Palestinians has always been part of the African Union’s struggle, so was Apartheid South Africa, but today she is fine. Why have we neglected Palestine? Why don’t we see the issue of the Palestinian plight with hundreds killed and injured and thousands crippled? If something like this wasn’t going on, Saudi Arabia of all countries would not have had the effrontery to treat the Yemenis the way they have done,” the former President stated.

Mr Rawlings also called on Sheikh Sharabutu to use the period of his anniversary and Ramadan to send a message that this kind of persecution has to stop.