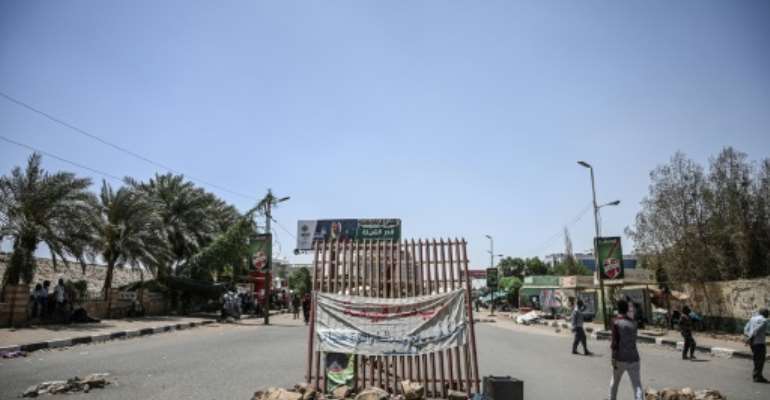 Sudanese protesters are refusing to dismantle checkpoints they have set up on roads leading to the army headquarters. By OZAN KOSE (AFP)

Sudan's army rulers on Monday demanded protesters remove blockades on roads leading to the military headquarters where thousands of demonstrators have camped for days calling on them to step down.

The order came a day after protest leaders suspended talks with the ruling military council about transferring power to a civilian administration -- the key demand of demonstrators.

Protesters have massed outside the army complex since April 6, putting up barricades on roads leading to the area as well as checkpoints to frisk people coming to the rally.

"The roads have to be opened immediately to facilitate the movement of trains, and all means of transport in the capital and other states so as to help movement of essential items," the military council said in a statement.

On Sunday Sudan's new military ruler General Abdel Fattah al-Burhan voiced dissatisfaction with protesters setting up checkpoints and searching those who come to the sit-in.

"It can't continue like this because security is the responsibility of the state," Burhan said.

Protesters vowed to remain at the checkpoints they have set up every few metres across the roads leading to the protest site in central Khartoum.

"We will carry on manning the checkpoints as usual," 23-year-old demonstrator Kawthar Hasaballah told AFP.

"No one, not even the military council, will remove us from our places."

Demonstrators entering the site have to go through several layers of checks, including personal frisks and searching of their bags, an AFP correspondent reported.

Protesters have accused the military council of being little different from the ousted regime of veteran leader Omar al-Bashir who was topped by the army on April 11 following months of demonstrations.

Since then a 10-member military council led by Burhan has taken power.

Protesters want the council to be dissolved and to hand power to a transitional civilian government.