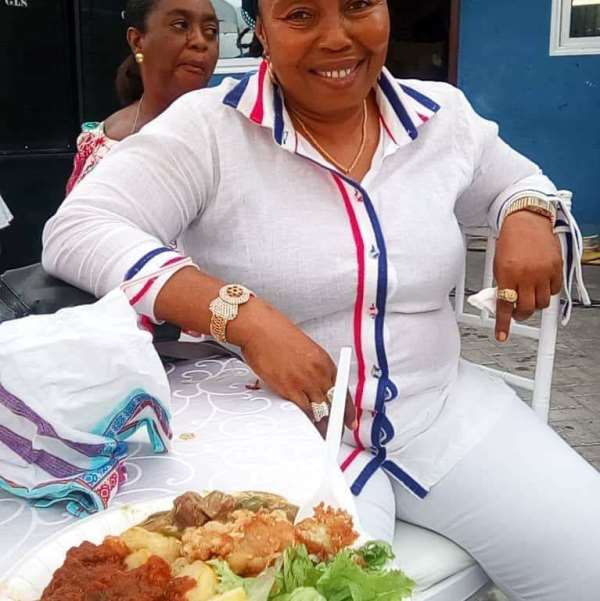 The Women Organiser for the New Patriotic Party (NPP) in Ashaiman, Hajia Amina Gado was last Thursday night hauled before the Ashaiman District Crime Officer by a businessman within the community for allegedly defrauding him of an amount of fifty thousand Ghana cedis.

According to the businessman, Robert Senyemi, the said amount was part payment made to the women organiser, Hajia Gado over some piece of land situated within Tema Community 12.

Mr Senyemi told the police in his statement that the NPP women Organiser last year, sold some 22 acres of land valued at 1.7 million Ghana cedis to him but he later discovered that the land in question does not belongs to her.

The businessman narrated that, prior to the payment of the full amount, Hajia Amina Gado requested for an amount of fifty thousand Ghana Cedisedis to be paid to her to offset some debt she incured during the Constituency election.

Mr Senyemi narrating the story said, "Somewhere July last year, Hajia Gado was introduced to me by the Ashaiman 2nd Vice Chairman of the NPP, one Ibrahim Boye Akwetey. Upon meeting Hajia, she told me she had a 22 acre plot of land at Tema community 12 which was up for sale. I therefore expressed interest in the property after which she offered to sell the property to me at 1.7 millionn Ghana cedis. Even before I could conduct a search on the property, Hajia told me she had incured a lot of debt during the Constituency election and as such pleaded with me to make a deposit of 50 thousand Ghana Cedis to enable her pay off her bills which I obliged.”

He narrated that he later conducted a search which turnout that the land in question was a property of the Wildlife.

He said: “I therefore approached Hajia Gado on the outcome of my search of which she promised to refund my money but to no avail. This woman for the past few months keep playing hide and seek with me."

Mr Senyemi continued that, "having gone through several months of back and forth with the NPP Women Organizer who seem not to be prepared to refund my money, I decided to lodge a formal complaint with the Ashaiman District Police for the law to take its course. She has completely defrauded me and such a character leading a political party must be exposed as she is destroying the image of the party she represents."

Mr Senyemi expressed disappointment in the woman who occupies such a high office in the NPP for destroying her image and that of the Party.

“My investigation has it that I am not the only victim to her scams as there are several more vulnerable people who have suffered similar ordeals in the hands of this women organiser who seem to be hiding behind politics to defraud people," he alleged.

"When the police attempted arresting her, she resisted arrest and rained unprintable insults on the personnel who had gone to pick her at her house. Similar act was repeated at the police station when she was ordered to be detained. She threatened mayhem as persistent calls from her constituency Chairman compelled the police to grant her bail,” he told the media.

Efforts to get the Ashaiman District Crime Officer to react to the incident proved futile.

The Women Organiser is also alleged to have collected several sums of money from some traders within Ashaiman with the promise of granting them loans but to no avail.

The affected traders are also threatening to take action against the Women Organiser.

However, efforts to get through to her has not been successful.