Akufo-Addo Is A Breaker Of Rocks – Ya Naa 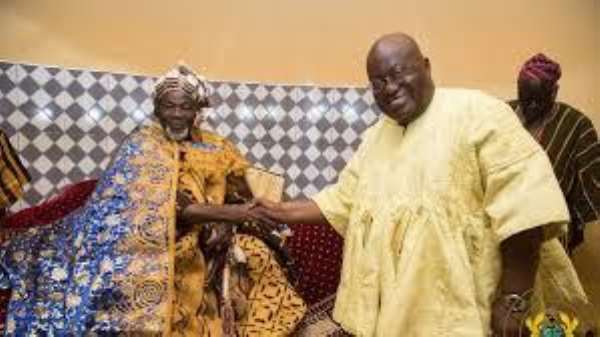 The overlord of Dagbon, Ya Naa Abukari Mahama II has touted President Akufo-Addo for the current peace in the Northern Region.

According to him, the Mion Lana and Yoo Naa can now sit together at a function due to the peace fostered by the president.

‘The peace process is difficult but you have proven that indeed you are a breaker of rocks, ‘ he told President Akufo-Addo.

‘It would have been a miracle four months ago to see both the Mion Lana and Yoo Naa siting together as we see’, he added.

The Ya Naa indicated that the Tamale interchange project is happening today due to the peaceful atmosphere in the region.

The Sagnarigu Naa, Abdulai Yakubu who spoke on behalf of the Ya Naa said the overlord is ever prepared to rally sons and daughters of Dagbon to support developmental projects by the Nana Addo led administration.

The Sagnarigu Naa noted that the Ya Naa will make sure that the Tamale Interchange project is successful.

He however appealed to the president to bring more of the developmental projects to Dagbon to reduce unemployment rate in the region.