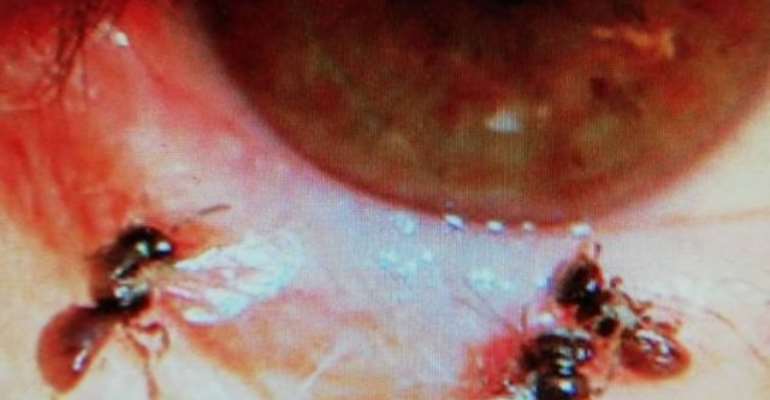 In a medical case that doctors have called a “world’s first”, a Taiwanese woman was found to have four live sweat bees living in her eye, feeding on her tears for long.

The patient, referred to only as Ms. He, was reportedly tidying up a relative’s grave at the cemetery by pulling out weeds when a gust of wind blew what she thought was sand and dirt into her eye. She cleaned her eyes with water, but a few hours later she started feeling a sharp pain in her left eye and started constantly tearing up.

The 20-something woman was taken to Fooyin University Hospital in Taiwan’s southern county of Pingtung, where ophthalmologists were shocked to find four live sweat bees feeding on her eye like it was a salt lick.

“We were visiting and tidying a relative’s grave, and I was squatted down pulling out weeds,” Ms He recalled. “I felt wind blowing into my face, then I felt something in my eye which I thought was sand or dirt. I cleaned my eye using water but it started hurting a lot at night, a sharp pain, and I was tearing up.”

The young woman had swollen eyelids and was suffering from cellulitis and keratitis – a skin infection and an inflammation of the cornea – as a result of the small insects feeding on her eye for several hours.

“I saw something that appeared to be insect legs, so I pulled them out under a microscope one at a time without damaging their bodies,” Dr Hung Chi-ting, the hospital’s head of ophthalmology, said. “They were four sweat bees.”

Sweat bees nest near graves and in fallen trees, and apparently treat us human as salt licks, although a case of them actually living in someone’s eye and feeding on their salty tears is apparently unprecedented.

After having the bees removed and being treated for her symptoms, Ms. He was discharged and is expected to make a full recovery.