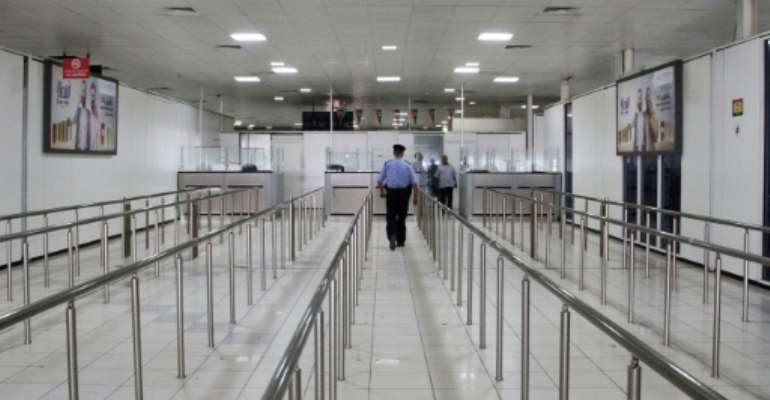 A Libyan policeman walks in the empty Mitiga International Airport in September last year, when the facility was closed by an earlier round of militia clashes. By Mahmud TURKIA (AFP/File)

A warplane carried out an air strike Monday against the Libyan capital's only functioning airport, authorities at the site said, as fighting raged for control of Tripoli.

A security source at Mitiga airport east of the city said no side had yet claimed responsibility for the raid, which hit a runway without causing casualties.

There has been heavy fighting near Tripoli since the forces of military strongman Khalifa Haftar launched an assault on Thursday aimed at taking the capital.

Oil-rich Libya has been rocked by violent power struggles between an array of armed groups since the NATO-backed overthrow of dictator Moamer Kadhafi in 2011.

Haftar, a former Kadhafi military chief, has emerged as a major player, his self-styled Libyan National Army backing an administration in the country's east in opposition to the UN-backed government based in Tripoli.

The capital's main airport was destroyed in fighting in 2014.

Mitiga airport is on a former military base on the city's eastern outskirts, and it was forced to close several times because of clashes between militias last year.