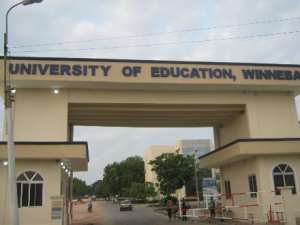 Member of Parliament (MP) for Effutu, Mr Alexander Afenyo-Markin, has called for the reinstatement of all the sacked teaching and non-teaching staff of the University of Education – Winneba (UEW).

Speaking with journalists in Accra on Friday, he said the decision by the Vice-Chancellor (VC) of the UEW, Rev. Fr. Professor Anthony Afful-Broni, to reinstate only three lecturers was "half-baked" as it was against the spirit of the decision to reinstate all the about 30 sacked staff.

He said the decision taken at a meeting that he participated in, involving the Governing Council and a delegation from the Education ministry, was that all the staff who had disagreements with the new management should be reinstated.

Mr Afenyo-Markin said if Prof Afful-Broni failed to bring about reconciliation at the university, then he should vacate his position as the VC.

"I have taken a position that if the VC cannot demonstrate the ability to reconcile. There is no point in he being there.

"We all have confidence in him. We all believed in his position for the university. That is why when he petitioned my office together with some colleagues of his. I took up the matter. So I get a bit disappointed when people say that my office is interfering in the affairs of the university," he said.

The reinstated lecturers are the Principal of the College of Languages Education at Ajumako, Prof. Ephraim Avea Nsoh; local President of the University Teachers Association of Ghana (UTAG), Dr Frimpong Kakyire Duku and an alumni representative on the University Council, Dr Emmanuel Osei Sarpong.

According to the University Teachers Association of Ghana (UTAG), Rev Father Afful-Broni had been on a purging spree, eliminating critics and dissidents after he was sworn in as Vice-Chancellor in March 2018 following a period of unrest within the university.

The university was closed down following demonstrations which continued for three days by the students.

At least 30 teaching and non-teaching staff are said to have been sacked since Prof. Afful-Broni took over.

However, he said, "My worry is that we should not give a half-baked solution. We need a complete solution. We need to resolve the matter once and for all. As far as I know from the meetings that I participated and the conclusions arrived there too.

All those who were sacked as a result of disagreements with the new management in one way or the other were supposed to be reinstated.

"I believe the Vice Chancellor is well aware of this. He and I know that those people, most of them were seen to be supporters of Professor Mawutor Avoke (former VC). We are all tasked to ensure reconciliation, reconciliation should not be done in a manner that will not give a positive impression", he said.

Mr Afenyo-Markin said the gang of six, that Professor Mawutor Avoke, the former VC of the UEW, and his group were supposed to be compensated.

Therefore, he said, there was the need for a full package and a complete announcement but to solve it half way by giving an explanation that the others are also on the table creates a disturbing situation.

"I would want to plead with all stakeholders to work around the clock and ensure that this matter is resolved once and for all.

"We owe it a duty to mother Ghana and a duty to the academia to ensure right things are done. If we allow things to degenerate and we say it is academic freedom, autonomy and all that. One day it will come back and haunt all of us. What was wrong yesterday remains wrong today and will remain wrong tomorrow. Let us look at the critical issues and address them once and for all so that at the end of the day all those affected staff will see themselves as one,"he said.